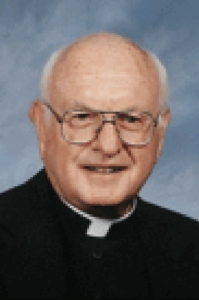 Msgr. Robert C. Fichtner passed away June 7 at his residence in Waltham, after a period of declining health. He was 84 years old.

Born on Feb. 8, 1929, in Brighton, he was the third of four children of Carl R. and Rose (Conlin) Fichtner. He was the brother of Mary E. O'Connell of Waltham, and the late Paul E. Fichtner of Waltham and the late Lt. Edward J. Fichtner, U.S. Air Force, who died in the Korean War.

He was educated at Our Lady of the Presentation Grammar School in Brighton, St. Joseph Academy in Wellesley Hills and graduated from St. Sebastian Country Day School, Newton, in 1947.

In the fall of 1947 he entered St. John's Seminary in Brighton to begin his studies for the priesthood and was ordained Feb. 2, 1955 at the Cathedral of the Holy Cross by Archbishop Richard Cushing.

Msgr. Fichtner's first assignment in the priesthood was at St. Peter Parish in Plymouth. He was later assigned to the Catholic University of America in Washington, D.C. to study Canon Law (1958).

During his time in Newton, Msgr. Fichtner was a part-time member of the faculty of his alma mater, St. Sebastian's School, and a spiritual director for the seminarians at Blessed John XXIII Seminary in Weston. He was a member of the Newton Council of the Knights of Columbus.

In 1981, Cardinal Humberto Medeiros appointed him as pastor of St. Joseph Parish, Holbrook, where he served for 10 years.

In 1990, Cardinal Bernard Law appointed him Pastor of St. Patrick Parish, Watertown, where he led his congregation in the celebration of their Sesquicentennial Jubilee in 1997. In 1996 he was appointed Vicar Forane, West Region, Newton Vicariate then in July 2000 as Interim Regional Vicar, West Region. On Dec. 19, 2001, he was named a Prelate of Honor, the second of the three levels of monsignor.

His Funeral Mass was celebrated on June 12 at St. Patrick in Watertown. Interment followed at Holyhood Cemetery in Brookline.