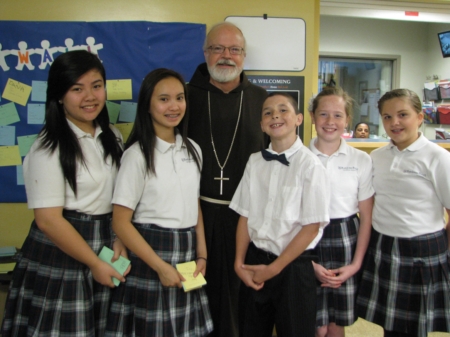 DORCHESTER -- A group organized in an effort to rebuild Catholic education in Boston celebrated a milestone last week.

The principal of the campus said the school was proud to host the event.

"It really was an honor and a privilege to welcome those men and women who have so generously financially given to the Campaign for Catholic Schools," Kate Brandley said.

Speakers at the event said the Campaign for Catholic Schools raised over $75 million -- including $7.5 million from a recent anonymous donation -- since it began and created three academies in the archdiocese: Pope John Paul II Academy, Trinity Catholic Academy and South Boston Catholic Academy.

The foundation started in December 2007, but the campaign celebrated the anniversary this month to make sure Connors and the cardinal could attend.

"We started, as a start-up, with a few names on a piece of paper and we were able to talk to people about what we were doing with the Catholic schools, so now we have about 850 donors. We invited a portion of those donors to come and be thanked," vice president of development for the campaign Mary F. Myers said.

Connors brought in a group of supporters from the business community and pioneered the campaign as a philanthropist after a request from the cardinal, in an effort to strengthen the Catholic identity of the schools and enhance the potential for their contribution to society.

"We have attracted philanthropic support from a lot of groups who really find Catholic education to be tremendous for children," she said.

In that time, the campaign moved to accomplish more than just enhance fundraising or save standout schools individually. They endeavored to make systemic changes to save on costs and implement an effective model that could be replicated.

Myers said a 2012 paper published by the National Roundtable on Church Management, explaining elements of the campaign's model to renew Catholic education, prompted contact with other organizations throughout the country seeking to implement similar reform.

She said a foundation in Florida called the model "one of the bright lights in terms of urban Catholic education."

In 2008, the campaign began to move forward with the model it hopes to apply.

The Pope John Paul II Catholic Academy went from seven schools managed by parish pastors and principals to becoming a single school with four campuses managed by a board of trustees and a regional director. Academies benefiting from the campaign have added longer school days and more after school, sports and music programs.

With fewer buildings to manage, the effort has completed renovations at the facilities on the Neponset Campus and the Columbia Campus in Dorchester, with assets cued up for renovations of the Lower Mills Campus on Dorchester Avenue and the Mattapan Square Campus.

The principal at the Neponset Campus said the benefit to her school goes beyond facilities.

"The Campaign for Catholic Schools provides many things for our children, besides physical renovations of our buildings," Brandley said.

She said the campaign provides help including scholarships for children at the school.

"They are responsible for renewing Catholic education in the city of Boston, so my children are direct recipients of their generosity," she said.