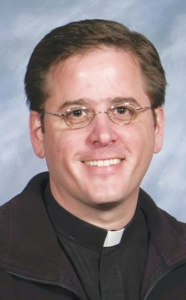 Father Brian P. Smith passed away June 3 at Brigham and Women's Hospital in Boston following a battle with colon cancer. He was 45 years old, and had just celebrated his 10th anniversary of ordination.

He was a son of Sacred Heart Parish in Weymouth and attended Weymouth North High School, graduating in 1985. He earned a bachelor's degree in English at Bridgewater State College in 1992 and went on to teach music at St. Coletta's Day School in Braintree. He also worked as a reporter for The Pilot from October 2000 to June 2001.

Father Smith attended St. John's Seminary and was ordained to the priesthood by then-Apostolic Administrator Bishop Richard G. Lennon at the Cathedral of the Holy Cross on May 24, 2003.

He continued to serve at St. Edith Stein until 2011, being named a member of the team ministry in January 2008 and then administrator in August 2010.

Father Smith is remembered for his love of music, playing guitar, reading, movies, and especially spending time with family and friends.

He is survived by his parents; his brothers, Michael M. and his wife Carolyn Durso-Smith of Guilford, Conn.; Kevin J. and Stephen F. Smith of Weymouth; his nieces Molly and Maggie, and nephew, Christopher; his uncle, James F. Bailey of Scituate; aunts, Grace Ann Horgan of Foxborough, and Ann Toland of Braintree, as well as several cousins.

His funeral Mass will be held at his home parish, Sacred Heart Church in Weymouth, on June 7 at 12:30 p.m. Cardinal Seán P. O'Malley will be the principal celebrant and Father Sean Connor will serve as the homilist. A private family interment will follow at The Village Cemetery in Weymouth.