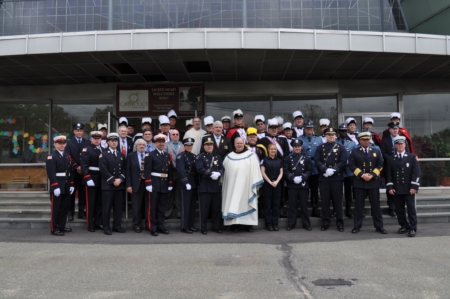 First responders and Knights of Columbus are pictured outside Sacred Heart Church in Waltham following a May 11 Blue Mass sponsored by the Knights.

The Cardinal Spellman High School board of trustees announced the appointment of Julian Peebles as the next president of the school effective July 1.

Peebles is a graduate of Cathedral High School in Indianapolis, and began his teaching career at Cathedral following his graduation from Butler University. In his business career, he ran the largest independent distributor of dairy products in central Indiana.

Peebles later returned to Cathedral as president to boost enrollment from 550 to 1,175 students, organize a $20 million project raised to renovate and expand the campus, and see the school honored as a "Blue Ribbon School" by the U.S. Department of Education. During Peebles's presidency, scholarship dollars quadrupled at Cathedral High School and the school expanded programs in music, drama, and the arts while experiencing success in athletics.

Most recently, Peebles served for 12 years as President and CEO of the Ruth Lilly Health Education Center in Indiana, serving more than 500 schools around the state.

Stonehill College has named Father John Denning, CSC, its 10th president following a unanimous vote by the board of trustees on May 17.

Currently the Vice President for Student Affairs at the College, Father Denning will assume the presidency on July 1, as Father Mark T. Cregan '78, C.S.C. steps down after 13 years of leading the 65-year-old Catholic liberal arts college.

Since 2007, Father Denning guided the Stonehill Student Affairs Division. Prior to that, he served as the college's first Vice President for Mission, establishing that division and launching initiatives to enhance Catholic identity at the College. Father Denning began his service at the College in 2000 as its Director of Campus Ministry.

Prior to his arrival at Stonehill, Father Denning served as campus minister at the Catholic Center at Bridgewater State University; teacher, coach, and chaplain at Coyle & Cassidy High School in Taunton; and vocations director for the Congregation of Holy Cross.

He is a current Trustee of King's College in Wilkes-Barre, Pennsylvania -- another Congregation of Holy Cross institution. Also active in local affairs, Father Denning serves on the boards of My Brother's Keeper in Easton and Father Bill's and Main Spring Coalition for the Homeless in Brockton.

The inauguration of Father Denning as president of the college will take place on campus later in the year and planning for that event will begin shortly.

The Saint Francis of the Sacred Heart and Our Lady Comforter of the Afflicted Knights of Columbus Councils celebrated a Blue Mass to honor emergency responders on May 11, 2013 at Sacred Heart Parish in Waltham.

The term "Blue Mass" is a reference to the color of the uniforms worn by many in these professions, and dates back to 1934. Particularly in the wake of events of Sept. 11, 2001, the Blue Mass is a way to recognize the sacrifice of police, firefighters, and EMS personnel, and to remember those who have given their lives in service to their communities.

The Board of Trustees of Cathedral High School announced in May that Oscar Santos will become the school's new headmaster on July 1.

"His commitment to the quality of education and his concern for student development and growth fit exactly with the interests and goals of the Cathedral family," said John Drew, Chairman of the Cathedral High School Board of Trustees.

For the past three years, Santos has been the superintendent of schools for the Randolph Public Schools. In Randolph schools, Santos helped increase academic achievement, decrease drop-out rates and increase graduation rates.

Santos was recognized as Boston Teacher of the Year in 2002 and received the Governors' Award for Latino Extraordinary Leadership in 2011.

Santos replaces James Rice, who has served as interim headmaster for two years. Rice also serves as a member of the schools' board of trustees and will assist Santos in various non-academic areas.