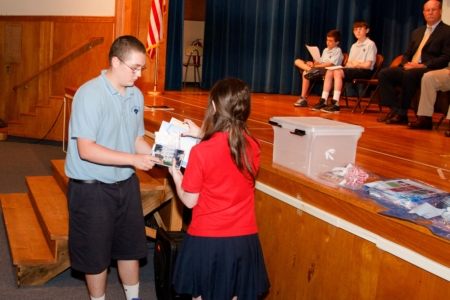 Students at in Weymouth James Rogers and Mary Margaret Morrissey prepare items to be placed in the school's time capsule May 31.

WEYMOUTH -- Students at Sacred Heart School in Weymouth sent a message of strength, renewal and historical significance ten years into the future as they buried a time capsule May 31 to mark their school's 100th anniversary.

Principal Christopher Beza welcomed State Representative for Weymouth James Murphy and Bob Fowkes, a spokesperson for Congressman Stephen Lynch, in the school's auditorium, before students and guests headed outside to bury the time capsule next to a tree the principal said students worry they might knock over when they play soccer in the schoolyard.

"The time capsule will remain buried in that location until it is unearthed in exactly ten years. We thought about waiting a hundred years, but we liked the idea of the school community opening it every ten years, seeing what was put in it originally by us, and adding to it every time," he said. "So, our pre-K students: you will be in eighth grade the next time this is opened."

Inside a plastic container, students placed nine items reflecting the times at Sacred Heart 100 years after the school was first established in 1913.

SHS student council members explained each of the items before placing them each in plastic bags inside the water-tight container.

"The first item we're placing in our time capsule is a brick cross. This cross was created out of brick from the original Sacred Heart Church, which was lost in a fire on June 9, 2005. This artifact represents a time of sadness and pain for our school and parish community, but also a time of resilience and unity," student council member James Rogers said.

Along with the brick cross the students placed a wooden ornament depicting the new church, a binder created by students with words and pictures describing the world and a Boston Strong poster with a copy of a letter sent to Boston mayor Thomas Menino accompanying a donation to One Fund Boston.

"On behalf of the Sacred Heart School community, I am pleased to present The One Fund with checks totaling $1,584.00 from our school collection to assist the families of the victims who were killed and the victims who were most seriously affected as a result of the tragic events related to the Boston Marathon. Our school community continues to pray for all the victims and their families and all those affected by this tragedy. We pray for God's healing grace and we are hopeful that one day soon there will be peace in our world," the letter said.

The students also placed school uniforms, a draft of the five-year strategic plan for the school, photos of the school with a calendar, and a 100 year decal and a program from the "Legacy Gala, A Night to Remember," which included a complete history of the school, and a list of each grade students' favorite toys, books, authors, songs movies and singers.

Fowkes presented the students with an official congressional record showing that Congressman Stephen Lynch had on April 12 made the anniversary part of the official record of history in the nation's capital.

"Congressman Lynch got up in the House of Representatives, in Washington D.C., and read these remarks into the record," Fowkes said.

He told the students they could, from now on, go to the House Clerk's office in Washington and see the official congressional record.

Mayor of Weymouth Sue Kay could not be at the presentation, but the principal read a commendation the mayor had prepared for the occasion.

"Whereas the entire community bestows heartfelt congratulations on this momentous and joyous occasion of the school's 100th anniversary, I therefore, Susan M. Kay, Mayor of the Town of Weymouth, dedicate Friday -- that's today -- May 31, 2013 as Sacred Heart School Day in the Town of Weymouth," Beza said, reading the commendation.