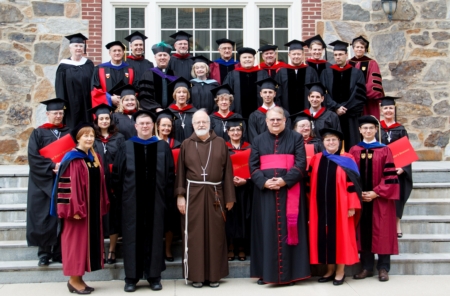 The 2013 graduates of St. John's Seminary's Theological Institute for The New Evangelization pose with Cardinal O'Malley and faculty and staff following the May 22 commencement ceremony. Pilot photo/Christopher S. Pineo

BRIGHTON -- The Theological Institute for The New Evangelization graduated 10 in the 2013 class of the Master of Arts in Ministry (MAM) and the first graduate of the Master of Theological Studies (MTS) program at the commencement ceremony May 22 at St. John's Seminary.

"With Sister Catherine O'Connor, we have someone who has dedicated her life to the work of charity, and that is what the Theological Institute is all about," he said.

Sister Catherine said human experiences, asking questions and life-long commitment contribute to the stories of individuals who work to better the world, even by humble means.

"And so, you also will listen to your heart's longings and tell a story in your own little way," she said.

Since its establishment in 2000, the MAM program has graduated 12 classes of lay leaders who have become pastoral associates, religious education directors, and employees of local Catholic entities in service to the Church. The program is taught by numerous members of St. John's faculty and became part of Theological Institute for The New Evangelization when it was established in 2011.

Cardinal O'Malley assisted Msgr. Moroney in the conferral of degrees after the commencement address.

Ellen McDonough spoke representing the graduates, and encouraged her fellow graduates to a life of discipleship.

"Disciples work in and with their parish community to ensure that all are welcome, and all will be served through the ministry of the Church. Disciples ensure that sound catechesis and continued education opportunities are offered in the parish and in the community, because they understand that it is only when their faith permeates every aspect of their lives do Christians become truly open to the transforming power of the Gospel," she said.

"We are often reminded of the Lord's words to his followers to seek not so much to be served as to serve, and if we at the Theological Institute are to take these words to heart, the most important act of formation in our ministry is not academic instruction, as essential as that is, or the teaching of pastoral skills, as desperately needed as that is, but the example given by faculty and staff of what it means to serve like Christ," he said.

Cardinal O'Malley thanked the students for their commitment.