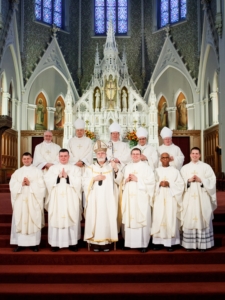 SOUTH END -- Family, friends, seminarians, clergy and religious from around the Archdiocese of Boston joined Cardinal Seán P. O'Malley as he ordained five men to the priesthood on May 25 at the Cathedral of the Holy Cross.

"Your vocation is to participate in the priesthood of Jesus Christ, the good shepherd," Cardinal O'Malley said in his homily.

In his homily, the cardinal thanked a nearly full house at the cathedral for their support of the men, before he celebrated the Rite of Ordination to the Order of Presbyter for Fathers John A. Cassani, 33; Thomas K. Macdonald, 28; Jacques A. McGuffie, 67; Gerald A. Souza, 27; and Christopher W. Wallace, 30.

"In all of my years as a priest and religious reading of papal homilies, I must confess that no phrase used by a pope in the last hundred years has been quoted as much as Pope Francis' words to his priests in the Chrism Mass homily this year, where he tells us 'the shepherd should have the smell of the sheep,'" the cardinal said.

The cardinal conducted the ordination rite from the bishop's chair, called the cathedra, which symbolizes his apostolic teaching authority.

After the homily, each candidate approached the cathedra and promised obedience to the cardinal and his successors and lay prostrate during the singing of the Litany of the Saints.

The cardinal laid his hands upon each of the men, ordaining them priests, followed by all of the bishops and priests in attendance.

The cardinal handed each of the five new priests a paten and chalice, before they joined him at the altar to concelebrate the Mass.

After the ceremony, Father McGuffie told The Pilot he felt "up in the air" with excitement and appreciated the support of his good friend, Jacques Jean, who travelled from Florida to be present.

Father Macdonald, whose first assignment is to St. Agnes Parish in Middleton and to St. Rose of Lima Parish in Topsfield, said he looks forward to serving the church at a collaborative parish.

"It really is a kind of new chapter in the life of the archdiocese, and I am really looking forward to being a participant in this mission, this outreach," Father Macdonald said.

"I am sure it will be a wonderful experience, and a wonderful way to begin my priestly ministry," he said.

The other assignments of the newly ordained announced are:

-- Father Cassani to at St. Lucy Parish and St. Monica Parish in Methuen.

-- Father Wallace to St. Rita Parish in Lowell and to St. Marguerite D'Youville Parish in Dracut.