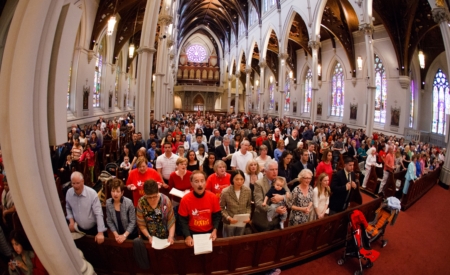 Members of the many of the new movements and communities within the Church gather Cardinal Seán P. O'Malley for Vigil Mass of Pentecost the at the Cathedral of the Holy Cross May 18. Pilot photo/Gregory L. Tracy

SOUTH END -- Cardinal Seán P. O'Malley celebrated Pentecost with the new movements, ecclesial realities, and ethnic communities of the archdiocese in Boston with a vigil Mass May 19.

The vigil mirrored one celebrated by Pope Francis in Rome the same day.

Pentecost, which falls 50 days after Easter, celebrates the day when the Apostles received the Holy Spirit and began preaching the Gospel.

The various groups at the multi-lingual Mass in the Cathedral of the Holy Cross joined the cardinal as he continued a Boston tradition started last year. Readings, songs and prayers at Mass were offered by representatives of groups including the Community of Sant'Egidio, the Brazilian Charismatic Community, the Neocatechumenal Way, the Emmanuel Community, Communion and Liberation, the Communidade Shalom, the Ugandan Charismatic Movement and Daughters of Mary of Nazareth.

The Gospel reading and prayers were proclaimed in numerous languages including English, Portuguese, Spanish, American Sign Language, German, Chinese, Luganda, Aramaic, evoking the idea of people overcoming language and cultural barriers to worship as a single community with the help of the Holy Spirit.

In his homily, the cardinal noted that Pentecost is considered the "birthday of the Church."

He recounted that, when he was growing up, the paschal candle which burns throughout the Easter Season was extinguished during the Mass for Ascension Thursday.

"It was very dramatic because we had just heard from the Gospel, if you could understand Latin, that Jesus had ascended to the right hand of the Father and 'poof!' the candle was extinguished. But, in the new liturgy, as you see, the paschal candle is still burning at Pentecost, which I think is very fitting because, who ever heard about blowing out the candles before the birthday party?" Cardinal O'Malley said.

"Today is our birthday, the birthday of the Church. Happy Birthday," he said, before applause peeled through the cathedral.

During the vigil, the cardinal also baptized newborn Vincent Francis Noe, the son of Vincent and Meghan Noe of Braintree. In his homily, the cardinal noted that, like Easter, Pentecost is a traditional day to welcome new members into the Church. In the United Kingdom, he said, Pentecost is often called Whitsun, from "White Sunday," recalling the white garments of the newly baptized.

Earlier in the day, Pope Francis also gathered with members of the new movements and ecclesial communities at a Vigil Mass in St. Peter's Square in Rome -- where he recalled in his homily the day of the first Pentecost.

"But what happened on that day, so distant from us and yet so close as to touch the very depths of our hearts?" the pope asked.

The pope said St. Luke provides the answer in Acts of the Apostles 2:1-11, illustrating how the Church overcame language barriers in a miraculous moment of origin.

"A completely unexpected scene opens up before our eyes: a great crowd gathers, astonished because each one heard the apostles speaking in his own language," he said.

"Today we contemplate and re-live in the liturgy the outpouring of the Holy Spirit sent by the risen Christ upon his Church; an event of grace which filled the Upper Room in Jerusalem and then spread throughout the world," Pope Francis said.