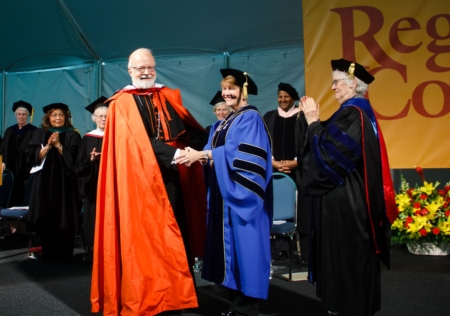 The cardinal entered the tent set up for the commencement with the procession of staff and faculty, ahead of more than 550 students across a spectrum of degrees ranging from associate to doctoral degrees.

As special assistant to the president of Regis College M.J. Doherty read the citation, she commended Cardinal O'Malley for his work as a teacher at Catholic University of America in Washington D.C., as a missionary Capuchin priest, and as a bishop and later archbishop.

She commended the cardinal's work in Boston as that of a healer after arriving in 2003.

"During the next 10 years, you worked more through an authoritative mutuality and relationship than a top-down string of imperatives, more through a series of thoughtful decisions and quiet pastoral initiatives than occasional flourishes of power," Doherty said.

"Your Eminence, Seán P. Cardinal O'Malley, OFM, Cap., Archbishop of Boston, our good shepherd, spiritual brother to Regis College founded and sponsored by the Sisters of St. Joseph of Boston, for your 'excellence with gentleness' in outstanding contributions to the worlds of education, social healing, and the life of faith, Regis College is pleased during this Year of Faith and the 10th anniversary of your episcopate in Boston to bestow upon you, with gratitude, deep respect and affection, the degree of Doctor of Laws, honoris causa," she said.

She also commended his appointment to an advisory group of cardinals to Pope Francis in Rome and his ecumenical and interfaith leadership in Boston after bombings at the Boston Marathon in April.

"When I was told I was getting the honorary degree, I did not realize it was going to be a doctorate in law. I won't be able to tell anymore of those lawyer jokes," the cardinal joked, as he opened the commencement address.

He encouraged students to use the foundation of the education they received at Regis College to follow the vision of the Sisters of St. Joseph to become leaders in society, their professions, and the Church.

"We are all blessed by the very capable manner in which Dr. Antoinette Hays refines the Regis mission for today's world by holding fast to the timeless principles on which the college was founded. I am honored to be added to the ranks of those who have received honorary degrees from Regis College," Cardinal O'Malley said.

In his address the cardinal recounted stories from his experience working for justice in various ministries within the Church, and encouraged graduates to work to promote Church social justice teachings as part of their Catholic identity.

"We learn discipleship the way we learn a language, by being a part of a community that speaks that language," he said.

He said the Church has a continuing and past history of being persecuted for its teachings.

"The amazing thing is that historically the Church was persecuted mostly for the truths that we talked about: Christ and the Church. The controversies were Arianism, or transubstantiation, or papal infallibility. Today the attacks directed at the Church are directed at our teachings concerning the dignity of the human person, the sacredness of life, the importance of marriage, and all the prerogatives that flow from being made in the image and likeness of God, placed on this earth to build a civilization of love," the cardinal said.

He spoke about Church teachings on social issues as a foil to cultural decay at the hands of moral relativism, spoke about the example of the saints as models of Christianity, and also encouraged mentoring toward the practice of basic authentic Catholicism.

"Peter Kreeft has said that in our contemporary society we have reduced all virtue to one: being nice. Kreeft laments that for the first time in history moral relativism and subjectivism are not an aberration of rebels but the reigning orthodoxy of the intellectual establishment," Cardinal O'Malley said.

"Our challenge is to be teachers of prayer, to help our young Catholics experience prayer so that when they gather for the Sunday Eucharist, they have a notion of why they are there and how to pray," he said.

"As people of faith, we are called to live the Gospel values by bringing God's love and truth into the world. May our graduates and all of us gathered here take this mission in heart, and go out and renew the world. God bless you and congratulations," he said.

Each year, the scholars program identifies a group of undergraduates to participate in a seminar addressing historical and new issues in the Church. The seminar is followed by travel together with faculty members to some international site related to those issues. Regis Erat Scholars have gone to Rome, Israel, China, and Kenya. Participants are also scheduled to travel to Le Puy, France, where the Sisters of St. Joseph of Boston originated.

"Because of you, high-achieving Regis students have visited Rome, Israel, China, and Kenya. One Regis student was baptized in the Jordan River, and all experienced the difficulty of the unresolved Palestinian-Israeli question and the dislocation of Middle Eastern Christians. Because of you, Regis women and men have grappled with the difficult practice of faith in China and have seen in person the marvelous community work of the Nyumbani Orphanage in Kenya," religious studies and philosophy department chair Ernest Collamati said, in the citation.