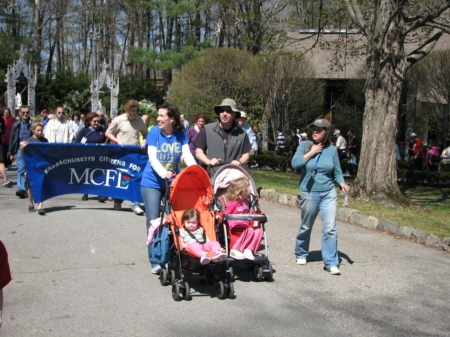 The National Shrine of Our Lady of La Salette in Attleboro hosted The Walk to Aid Mothers and Children, a fundraiser sponsored by the Massachusetts Citizens for Life (MCFL). The walk, which usually takes place in downtown Boston, took place April 28. Pilot photo/Christine Williams

ATTLEBORO -- For the first time, participants in the Massachusetts Citizens for Life (MCFL) Walk to Aid Mothers and Children marched on hallowed ground. The walk, held annually for nearly three decades and always in downtown Boston, took place at the National Shrine of Our Lady of La Salette in Attleboro on April 28.

On a warm, sunny Sunday hundreds of pro-lifers gathered to raise money for unborn children and mothers facing crisis pregnancies. A crisp breeze greeted participants as they circled the Rosary Pond, which features a giant rosary and plaques for each mystery. The path wound through a wooded area and past religious statues and the Stations of the Cross. The walk ended at the foot of the shrine's Monument to the Unborn, dedicated by the Knights of Columbus in 2010.

Organizers made the move to Attleboro because they wanted the event to be more family-friendly. There was face painting, ice cream and live music. Many participants remarked that the new site provided a prayerful, peaceful experience.

Jesse Theasilva, a Catholic from Fall River, prayed the rosary as she walked. She said that God will change hearts when more people dedicate rosaries to the unborn. "I strongly believe that if we want our country to change, it's through prayer."

He commended MCFL for trying a new venue, saying, "Perhaps the Holy Spirit is leading us in a new way."

Some participants expressed disappointment that the location did not allow for the chance to witness in the city, but organizers stressed that the walk is not meant to be a local March for Life. Instead, its purpose is to raise money for organizations that support unborn children and their mothers. This year, there were 43 beneficiaries.

In previous years the MCFL walk wound from Boston Common through the streets of the city. Held in the fall each year, organizers moved it to the spring to set the event apart from other pro-life activities that happen in October. No walk took place in 2012.

Anne Fox, president of MCFL, said that the last-minute change led to a smaller crowd than usual, but for the first year at a new location, the event went well.

"I think people had a really good time," she said. The new site had advantages over the old. Participants could walk at their own pace without worrying about traffic and had the freedom to stop and rest or visit the shrine's many attractions.

She praised the staff at the shrine, saying that not only were they "very gracious" but they are also dedicated to the pro-life movement.

Fox added she was relieved that the event did not take place in Boston less than two weeks after the marathon bombing, which took place April 15. In 2001, the walk was held three weeks after Sept. 11, and virtually no children came.

Joan Bailey -- director of Friends of the Unborn, a home for young pregnant women in Quincy -- said that the Boston Marathon bombing showed how "precious and fragile life is."

Alison Nardone, of Nashua, N.H., brought her five young children along. Most had their faces painted before the walk -- the two eldest boys with Spiderman masks. She said she brought them to show them "how important all life is." The lives of the unborn, the sick, the elderly and those with disabilities need protection, she said.

This year's MCFL walk baby -- Julia Kiley, 2, of Dedham -- brought with her an important aspect of the pro-life debate. She has Down syndrome, and studies show that when parents receive the prenatal diagnosis of Down syndrome, 90 percent of them choose to abort that child.

Julia's older sister, Anna, 4, said that it was "cool" that her sister was the walk baby. "Julia's cute," she added. But her favorite part of the day's festivities? Her vanilla ice cream. "My cone was delicious," she said with a grin.