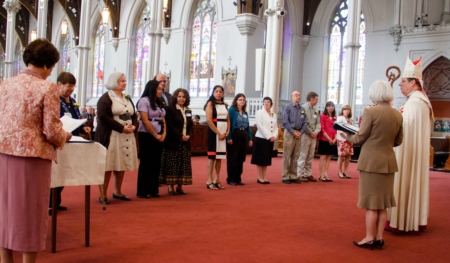 Bishop Robert P. Deeley presents certificates of recognition to catechists at an April 28 Vespers service at the Cathedral of the Holy Cross. During the vespers service, the archdiocese's Office of Religious Education presented awards to three catechists and recognized the work of 75 others. Pilot photo/Christopher S. Pineo

SOUTH END -- At solemn vespers April 28, a gathering of family, friends, clergy and fellow catechists welcomed and honored teachers of the Catholic faith with an afternoon of psalms, song and prayer at the Cathedral of the Holy Cross in Boston.

During the vespers service, the Archdiocese of Boston Office of Religious Education presented awards to three catechists and recognized the work of 75 other catechists for their "outstanding faithfulness and commitment."

Vicar General Bishop Robert P. Deeley presided at the prayer service to recognize the work of the catechists.

"I offer my congratulations to the catechists and catechetical leaders who are receiving recognition and awards at this gathering," Bishop Deeley said in his homily.

"I am deeply grateful to you for your contributions to building up the work of the Church, through your generous involvement in our ministry, helping to make our parishes, as Cardinal Sean reminds us, centers of the new evangelization," he said.

"We are delighted to have this opportunity, on the part of the wider Catholic community, to thank all of you for your part in the catechetical mission of the Church," Cardinal O'Malley said.

The award, named for a woman religious who created predecessors to current adult faith formation courses, recognizes directors of religious education programs for service to their parishes and the Church with distinction and excellence.

"I still can't believe that I would have even been nominated. It's just amazing," McIntosh told The Pilot.

As part of the criteria for the award, the candidate must receive nomination in writing from their pastor.

Gerardo Millan, the husband of Maribelle Ortiz Millan said, "This is a celebration of years' long work, sacrifice, both for her, for me, for all of us as a family."