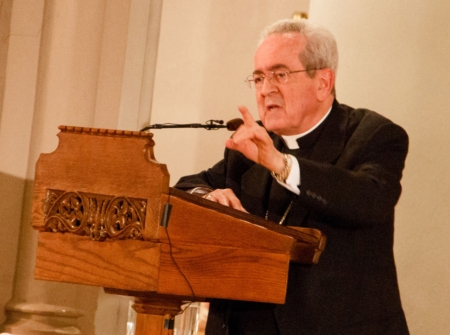 BRIGHTON -- Continuing a lecture series on the Second Vatican Council for St. John's Seminary, Cardinal Justin Rigali, Archbishop Emeritus of Philadelphia, related his first-hand knowledge of the council and one of its key figures for an audience at St. Columbkille's Parish in Brighton, April 29.

The cardinal explained that he was present daily at the first two sessions of the council. From 1964 through 1966 he served as an official of the Secretariat of State at the Vatican and later served as English-language translator for Pope Paul VI from 1970 until the pope's death in 1978.

The cardinal explained that the task fell to Pope Paul VI to implement the intentions of the first pope to oversee the Second Vatican Council, Pope John XXIII.

"He embarked upon an arduous task of continuing what Pope John XXIII had so happily inaugurated," Cardinal Rigali said.

"The principal aim of the Second Vatican Council is this: that the sacred deposit of Christian doctrine be more effectively guarded and taught," he said, quoting Pope John XXIII.

The cardinal said Pope Paul VI maintained a unity with his predecessor by making Christ the center of the teachings of the council.

He said Pope Paul VI called for obeying the precepts of Christ "with a submission faithful in everything" upon opening the second session of Vatican II in 1963.

The cardinal said Pope Paul VI sought to implement the teachings as an effort of the Church to define herself in the world. This included reaching out to the modern world and to other Christians, which he saw as an effort of charity.

The cardinal also spoke about the time after the council.

"I experienced him as one who continued, long after Vatican II, to help bring the council -- all its richness, doctrine and spirituality -- into the life of Christ's Church. I believe in my own life it was a blessing to be able to be so close to Paul VI," Cardinal Rigali said.

"He was empowered with a rich humanity. This humanity, this human understanding, this human compassion, this human mercy, this human interest was a great gift to the Church, a great instrument for the general implementation of all that Vatican II stood for," Cardinal Rigali said.

Throughout his talk, Cardinal Rigali related anecdotes of his experiences with Pope Paul VI that illustrated the pope's great care and compassion.

In one instance, he recalled being stopped by the pope as he prepared to leave after working late into the evening.

"How is Paul?" he said the pope asked him.

"I was taken aback. I had asked him some time before to remember my brother Paul in his prayers," Cardinal Rigali said. The cardinal's brother had been ill.

He said the pope then asked how Cardinal Rigali's brother was, how his wife was holding up, how the children were, and if there was anything he could do to help.

"Here he is the pope of a billion Catholics, and now he has four questions for me," the cardinal said.

The cardinal said the Christo-centricity of Pope Paul VI manifested itself in that kind of human touch as the pope implemented the teachings of Vatican II over the course of his remaining years.

After the talk, John C. Cahalan of Methuen, said he saw a contrast with a previous speaker in the series.

"I contrast it to George Weigel, which was academic and historical. This had a different purpose: to be a personal remembrance. It admirably fulfilled its purpose," he said.