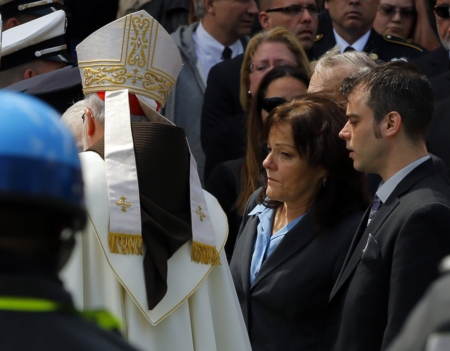 'This week I presided at the Funeral Masses for Krystle Campbell at St. Joseph's in Medford Monday (4/22) and Officer Sean Collier at St. Patrick's in Stoneham, Tuesday (4/23).' CNS photo/Brian Snyder, Reuters

This week I presided at the Funeral Masses for Krystle Campbell at St. Joseph's in Medford Monday (4/22) and Officer Sean Collier at St. Patrick's in Stoneham, Tuesday (4/23). The governor attended both of those Masses, and at Krystle's there was a huge crowd outside the church just waiting there respectfully to accompany the ceremony. Tuesday, there were many police there with the Collier family for the Funeral Mass. There was also a huge police presence at MIT where they had a memorial service, on Wednesday.

When a police officer dies in the line of duty, there is always a huge police presence at the Mass or the memorial service and they come from as far away as Canada. That was the case for Sean Collier, but the massive police presence was actually at the memorial service at MIT. Of the four people that died as a result of this attack, the three who were from Boston were all Catholic. While we were celebrating the Mass for Officer Collier, Father Sean Connors and Father John Connolly were celebrating a Mass at the cemetery with the immediate family members of the Richard family. There will be a public service for Martin Richard, the 8-year-old who died as a result of the blast, at some time in the future, but his mother and sister are still recuperating from their injuries as the result of the same blast that killed the little boy. The little boy's picture has been seen everywhere. He had just made his first Communion recently, but the picture that touched everyone was the picture of him with a sign that he was carrying that said, "No more hurting people." Hopefully his death will carry that message forward, and inspire people to overcome the kinds of hatreds and prejudices that lead to these violent acts.

On Tuesday (4/23), we had the annual meeting of the Society of St. James at St. Stephen's in the North End where I met the new director Father David Costello, who is doing a very fine job. We are very proud of the work that is being done. At the meeting it is always very interesting to learn about what is happening in the society. We are grateful to all the people in our parishes that support the missionary work of St. James by their prayers and by their financial support. In the last fifty years, we have sent 300 priests to Peru, Bolivia, and Ecuador to provide pastoral services in those countries.

That afternoon (4/24) I went to a gathering of the Regina Cleri Friends, a new initiative that Joe D'Arrigo is spearheading to involve laypeople in a supportive role to our retired priests.

Although it is called the Friends of Regina Cleri, the scope is really to be outreach to all our retired priests who are also living on their own or in other nursing homes. The initiative was very well received. We had a wonderful group there.

Superiors of the Women Religious

Yesterday (4/25), as we do periodically we had a meeting with the superiors of the women religious arranged by Sister Marian Batho. I gave them a report on the recent activities that I have been involved in, the conclave, the priest retreat in the Holy Land, and our outreach to the victims of the violence on Patriot's Day. Two of the sisters gave us a report on the Josephine Bakhita House, a house for women who are victims of human trafficking here in Boston. The religious congregations of women particularly sponsor and support it. Father Paul Soper and Sister Pat Boyle, also gave a report on pastoral planning efforts in the archdiocese and there was a conversation as to how the religious communities could be supportive and part of this.