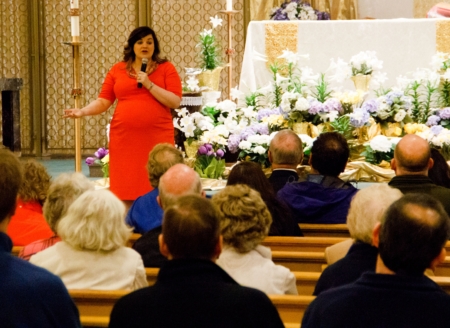 Abby Johnson, author of "Unplanned: The Dramatic True Story of a Former Planned Parenthood Leader's Eye-Opening Journey Across the Life Line," spoke at a set of engagements promoted by Massachusetts Citizens for Life on April 13 at St. Stephen Parish in Framingham and April 14 at St. Catherine Church in Norwood.

In her talk "Planned Parenthood's War on Women" at St. Stephen's, she told her audience that she received support from many pro-life activists and Catholics during and before the time she switched sides after eight years working at Planned Parenthood. Johnson worked as director at a clinic in Texas, and said she found compassion directed toward her from pro-life advocates and Catholics throughout her time there.

"They had been there for me when I was doing something they objected to," she said.

With time, she became gradually disturbed by what she had considered a "service" to pregnant women, but on one occasion the sight of an ultrasound-assisted abortion appalled her.

"I'm looking at the screen and I am thinking, okay, this really looks like a baby. It has all the parts; arms, legs, toes," she said.

She recalled seeing the baby struggling inside the womb as if it attempted to escape the abortion doctor's tools.

"But, I had to convince myself that it was not a baby," she said.

Johnson, at that point in her career, had already seen the aftermath of abortion.

"I knew what the death of a child looked like," she said.

She said the procedure bothered her, but the callous attitude of an abortion doctor left an even deeper impression. She said she found herself appalled by what the abortion doctor said next.

"Beam me up, Scotty," she said, recounting the doctor's words.

After leaving her work in the abortion industry she worked with Coalition for Life in Texas, before founding an organization called "And then there were none" in 2011.

According to the group's website, their goal is to provide financial, emotional, spiritual and legal support to anyone wishing to leave the abortion industry. The ministry also helps to provide up to three months of financial support after a worker resigns, emotional support as often as needed during the transition time, a spiritual advisor of the former worker's choosing, and legal counsel to protect the worker's interests at no cost during the transition.

"In the end, I was convinced that I had to leave because of the people that were standing outside of the clinic praying for people like me," she said.

Before ending her talk, she told the audience that there is work to do in supporting pro-life ministries -- and that each person can do something to contribute. She focused on the simple work of educating people about the pro-life message in the context of truth.

Johnson now travels nationally and internationally sharing her story, educating the public on pro-life issues, advocating for the unborn, and reaching out to abortion clinic staff who still work in the industry.

She also serves as the chief research strategist for Live Action Films, senior policy advisor for American United for Life and works on projects for various pro-life organizations. Johnson lives in Texas with her husband and two children. She is expecting her third child this summer.

During a question and answer session following her talk, she said the church community she went to asked her to leave when they learned she left her work in the abortion industry.

"So we did, and I can't really describe it. The first time we went, I think my husband and I both just knew this was home for us," she said.

The team ministry priests at St. Stephen said it was important to have her speak in support of the pro-life ministry of the Church at the parish.

Father Albert H. Stankard said he wanted her talk "especially to encourage those who are working in the pro-life apostolate, which is so important today."

"Tonight there were people from Hispanic background, and French, and Italian, and Irish, and Portuguese. It was beautiful. We are all together here, because we are all trying to build up a culture of life, and that is what unites us," Father Francisco J. Anzoategui, known as Father Paco, said.

"To hear her testimony. To hear what she has gone through. It is really powerful. Her message is really strong," Kiara Marrero, 20, said.

"How bold she was, how honest she was, I really liked that being direct and firm on the teachings of the Church on truth. I thought that was really beautiful," William Paulino, 19, a sophomore at Providence College, said.