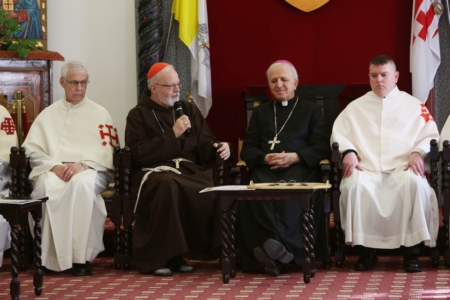 Below are excerpts of reflections of some of the priests who participated in the Holy Land retreat with Cardinal O'Malley. The reflections focus on the second part of the pilgrimage around Jerusalem. The original reflections can be found at www.thegoodcatholiclife.com.

On Friday morning, we had a meeting with Bishop William Shomali, Auxiliary Bishop of the Latin Patriarchate of Jerusalem.

(He) shared with us several of the problems the Church faces in this patriarchate. Some were common experiences that we see in Boston, too: he mentioned that many Catholics were cultural Catholics, who often proudly identify as Christian and want their children baptized, but who didn't really have a personal encounter with Christ. But some challenges are particular to the Holy Land, especially the challenge of ecumenical dialogue with the Orthodox Churches, and of inter-religious dialogue with Jews and Muslims.

These two challenges interact -- it is hard to have a strong Christian witness to Jews and Muslims when there are thirteen Christian Churches here, each with their own leader. Around the corner from the Latin Patriarch are the Greek Orthodox, the Greek Catholic, and the Armenian Orthodox Patriarchs, (a kind of "Patriarch's Way").

Bishop Shomali asks all of us for our prayers. He particularly asked us to pray Psalm 122, "Pray for the Peace of Jerusalem," and asked us to intensify our prayer for peace and unity in the Holy Land. May we all say to Jerusalem, and all who live therein, "Peace be to your homes, may peace reign in your walls ... Peace!"

"O Happy Fault!" One of the most powerful moments in the Holy Triduum Liturgy is the singing of the Exsultet. I thought of this line as we visited the Church called "St. Peter in Gallicantu." The Church commemorates Peter's denial of Christ at the house of the High Priest. Tradition holds that Jesus' trial was held here as well; in fact, beneath the floor of the Church, down a narrow, steep flight of stairs, is a cistern which may have been used as a prison which held Jesus the night of his arrest.

As we were in the Church, I couldn't help thinking that this Church could easily be seen as commemorating the shame of Peter, but it isn't. No, it is a testimony to the transforming love and mercy of Christ. I imagine Peter that night. I imagine the Lord looking at him as He's led to His trial and execution. What did Peter see in His face? I imagine not anger. Compassion, yes, and unconditional love and forgiveness. I think this is what allowed Peter to run to Christ after His resurrection, not away. As we were praying in the Church, I prayed that all of us, in our moments of guilt and shame, may see in it a moment to turn to The Lord, not away -- that our sins, like Peter's, can be transformed into moments of grace by Christ's healing Love, that it may give us the strength to boldly proclaim Him as Peter did after the Ascension in Solomon's Portico. O happy fault, that has merited us so great a Redeemer!

We concluded our day of pilgrimage at the famous Western Wall of the city, where devout Jews of many places and rabbinic schools were getting ready to begin the Sabbath. This wall is significant because it is part of the very same wall that once enclosed the Temple area. Although the Temple was destroyed in 70 A.D., we do well to remember, as these Jews do, that God's dwelling in the Holy of Holies was once on the other side of this wall.

Although many people call the Western Wall "the wailing wall," this name is not accepted here. What we saw and learned today makes plain why this is. Those who come here to pray, long for what is to come not what once was. They long for the Messiah and for God's everlasting reign in Jerusalem. Their pilgrimage, much like ours, is one of joyful remembrance and hope. May all our tears be dried by the God who comes to save His people.

Our belief in the Resurrection is one of, if not the, most important, doctrines of our faith. St Paul says that "if Christ has not been raised, your faith is pointless;" and every Sunday we profess our belief in the Resurrection when we say the Creed. Through his Resurrection Jesus Christ has conquered Death for all of us, has given us a further proof of his Divinity, and has shown that love ultimately is stronger than sin and death. The tomb is indeed empty. Christ is Risen! And we are his witnesses and the joyful bearers of his Resurrection!

A few hours after celebrating Mass at the empty tomb, we left for Bethlehem, full of anticipation. Our guides have been terrific and today was no different. Most of us knew that Bethlehem means "House of Bread," but were surprised to learn that in Arabic it is "House of Flesh": "And the Word was made Flesh." Another interesting point was that Herod's Tomb, lost for centuries, was recently found in ruins just a few miles from Bethlehem. He who tried to destroy the "newborn king of the Jews" is remembered by a pile of rubble, while people still come on pilgrimage to see the Grotto of Light.

At the Church, Father Francesco (Voltaggio)led us in through the narrow gate and asked us to open our hearts to God's great example of humility in becoming one of us. How often we have rebelled from God's call. Now in this place we have the opportunity to open our hearts as did Mary and Joseph. This place reveals the wonder of God's plan to send his Son to serve us and call us all to loving service. As we entered the nave we marveled at the Church's ancient beauty. Our fanciful mingling of faith and history came to a crashing halt as we encountered the crush of the crowd all trying to enter a four foot opening. We were humbled.

For me, it all came together at the Shepherds' Fields, where angels appeared to the poor, outcast shepherds, proclaiming the birth of Jesus. "Do not be afraid." "Glory to God in the highest." Christ's birth has changed the world and this place helps us to appreciate the wonder of God's plan.