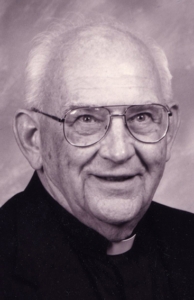 Father Francis W. Beksha passed to the Lord on April 17 in Medway. He was 93 years old.

After graduating from Boston College in 1942, he attended St. John's Seminary and was ordained to the priesthood on June 14, 1946 by then-Archbishop Richard J. Cushing at the Cathedral of the Holy Cross.

In August 1971, Archbishop Humberto S. Medeiros named Father Beksha pastor of St. Thomas Church in Millis where he would remain for almost 20 years. He entered senior priest status in September 1990, first residing at St. Mary Church in Franklin until December 1997 when he took up residence at Regina Cleri. In 2002, he took up private home residence in Medway.

Interment was to be at St. Joseph Cemetery in Medway.