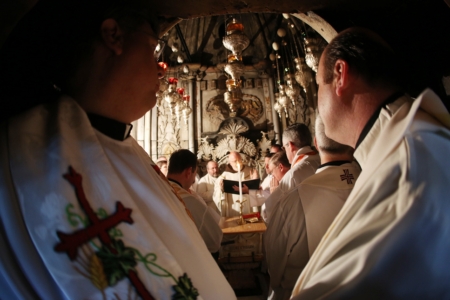 On top of the Holy Sepulchre was the altar where we celebrated the Mass and it was a very moving experience. Pilot photo/CardinalSeansBlog.org

Below is an edited version of the April 19 entry of Cardinal Seán P. O'Malley's blog, recounting his retreat in the Holy Land with 29 priests from the archdiocese; this excerpt completes the two part series on the retreat. This week's blog entry includes extensive coverage of the aftermath of the Marathon bombings, which is not included in this excerpt. To read the complete post, please visit www.cardinalseansblog.org.

In last week's post, I chronicled the first part of the retreat with priests in the Holy Land that took place in northern Israel around the Sea of Galilee.

Thursday evening we arrived in Jerusalem and stayed in the Notre Dame House, a retreat center entrusted to the Legionaries of Christ.

Our first stop on Friday was to visit the Latin Patriarchate. The patriarch, Fouad Twal, was in Rome to meet with the Holy Father so we met with one of his auxiliary bishops, Bishop William Shomali.

He spoke to us about the situation in the Holy Land and afterward bestowed the Pilgrim's Shell on five of the priests who are members of the Order of the Holy Sepulchre, and were making their first trip to Jerusalem.

Then we spent the rest of the day visiting holy sites around Jerusalem, including the Mount of Olives and the Garden of Gethsemane, the Church of St. Peter Gallicantu, the Chapel of Dominus Flevit, and the Church of the Pater Noster.

We had Mass at the Gallicantu, and visited the cistern there, where it is believed that Christ was held overnight during his trial. Father Bob Reed told me once that when he was a seminarian, he spent a night in that cistern!

Saturday, very early in the morning, we had Mass at the Holy Sepulchre. I was so moved by it. I did not realize that it was possible even to celebrate Mass there. When they told me the day before I was very excited.

Currently there are around 300 friars and around 100 sisters in the territory of the custody which includes Israel, the Palestinian Territories, Jordan, Syria, Lebanon, Egypt, and the islands of Cyprus and Rhodes.

He gave us a history of the presence of the friars there for 800 years, and the work that they do in the Holy Land.

He also talked about the importance of the Good Friday collection, which is taken up throughout the whole world, which began to be taken up in the 1400s. It is one of the oldest collections that we have. Two thirds of it is used for works of mercy, education and healthcare, and one third of that collection is used to support the holy places and the different shrines. It is a very important source of revenue for the Church in the Holy Land as it has been for several centuries.

After that, the priests went to Bethlehem, to visit the holy places there, including the manger, which is at the Basilica of the Nativity.

I, instead, spent some time with the lay people from Boston who had been with us in Galilee and were in Jerusalem at the same time we were.

We celebrated Morning Prayer at Domus Mamre, a beautiful location across from the walls of Jerusalem that belongs to the Syrian Catholic Church and is currently being used by the Neocatechumenal Way as a house of studies for seminarians and priests.

The venue is an extraordinary place that goes back to the time of Abraham. It is said of this place that Abraham, on his way to sacrifice his son Isaac, stopped there and told the servants to wait for them to get back from Mount Moria.

This is the site for the future Domus Jerusalem, a new retreat and conference center that will welcome pilgrims on their visit to Jerusalem.

Father Rino Rossi (the director of Domus Galilee International Conference Center) explained to the group that, like Domus Galilee, Domus Jerusalem will also serve as a center to promote interreligious dialogue, particularly with the Jewish world and we were able to show the group the plans that had been made.

It will be a wonderful site for the center and will also have accommodations for about 170 guests.

There is an ancient tomb from the first century on the property, and perhaps the most spectacular thing is the entire panorama of the temple and the Old City.

The next day, we went to Ein Karem where Mary's cousin Elizabeth lived and the place of the visitation.

Outside the church, the Magnificat is written on all the walls in many different languages. We prayed and visited the church, then we went to another church nearby, St. John Ba-Harim, the site of the birth of John the Baptist.

At that church the Benedictus is also displayed in many different languages. I took a picture of the Latin version.

On the way back, we had a Holy Hour with the Blessed Sacrament at the garden of Gethsemane.

We had the Stations of the Cross on Monday and ended in the Holy Sepulchre.

Many of the stations are right through the streets of Jerusalem, surrounded by shops and the bustling of people and it gives the impression that that is what it would have been like at the time of Jesus.

Monday afternoon we went to hear the Dominican Friar Jerome Murphy O'Connor who is a famous scripture scholar. We went to the Ecole Biblique de Jerusalem, and he gave us a very interesting lecture.

The next day, I went to visit my brother Capuchins in the Holy Land, to the house they have in the new city, in the Talbiye neighborhood. The house was built in 1933 because at the time there was a Christian population in the area. It is currently in a Jewish neighborhood. The house was abandoned during the Second World War, but it was given back in the 1990s. In 2010 the new center was inaugurated. The theme of the house is "Christ, the light of the world."