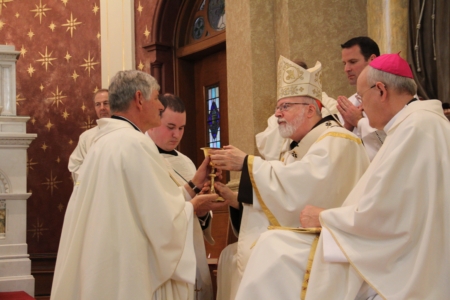 The Reception of the Bread and Wine at the ordination of Father Jurgen W. Liias to the Sacred Order of Priests of the Roman Catholic Church for the Ordinariate of the Chair of St. Peter on April 20 at St. Mary Star of the Sea Church in Beverly Pilot photo/Christopher S. Pineo

The native of Germany received ordination for the Ordinariate of the Chair of St. Peter. Msgr. Jeffrey N. Steenson, head of the ordinariate, concelebrated with Cardinal O'Malley.

The Ordinariate of the Chair of St. Peter is a national structure created by Pope Benedict XVI in 2012. It was formed in response to requests from former Anglican groups and clergy who wanted to become Catholic as a group, and retain aspects of their Anglican heritage and traditions, including parts of their liturgy. Special permission has been given on a case-by-case basis for former Anglican priests who are married to be ordained Catholic priests for the ordinariate.

Cardinal O'Malley emphasized the theme of Christian unity as he addressed the candidate in his homily during the ordination.

"Jurgen, we thank God for your generous response to this second calling and commend you to the loving care of the Mother of the Divine Shepherd, so that your ministry as a Catholic priest will draw people closer to the Lord and to one-another, as we strive for the unity that Christ prayed for at the Last Supper, and so that we will experience the fellowship of those first disciples who were of one mind and one heart," he said.

Msgr. Steenson reiterated the theme of Christian unity in his remarks at the end of the Mass.

"If we are not about the work of Christian unity, we have neglected one of the most important commissions that Jesus gave us when he prayed that we might be one as he and his Father are one. And so, I am so grateful for the tone that has been set in this ordination today," he said.

Father Liias moved to the United States at age four in 1952, where he grew up in an Episcopalian parish in Charlestown. He attended Amherst College, then Episcopal Theological School in Cambridge. In 1976 he became rector of St. Paul, an Episcopalian church, in Malden. After serving at another church he became rector at Christ Church in Hamilton. In 2009, he left the parish in Hamilton and helped a group of parishioners form Christ the Redeemer Anglican Parish in Danvers.

Father Liias participated in a formation program for ordinariate priests in 2012, received entry into the Catholic Church in August 2012, and Bishop Robert Deeley ordained him to the Sacred Order of Deacons in March at Saint Margaret Parish in Beverly Farms.

"I am profoundly filled with joy at becoming a Catholic, and profoundly grateful to God and the Church for making me a priest," Father Liias said after the ordination.

"I always loved being a priest. To become a Catholic I had to give up my priesthood as an Anglican, without any certainty that I would get it back as a Catholic. So, my heart is filled with joy today that the Lord has given His priesthood back to me," he said.

He took the name Vianney as his confirmation name, after St. John Vianney the patron saint of all priests. He joked that becoming a Catholic was a "retirement project."

"I am sort of starting a new career in my retirement," he said.

He and his wife, Gloria, have been married for over 42 years. They have two adult children as well as grandchildren.

"He is a bundle of energy and vision. He is a wonderful preacher. He is a great pastor, and I am excited for him. He retired for about five minutes, from the Episcopal Church and thought he might garden, and travel, and hike, but then he thought that this is something he has been wanting to do. God told him the time was right," she said.

During the ordination Mass, Msgr. Steenson and Father Liias shared the sign of peace with the family of the newly ordained leader of the St. Gregory the Great Catholic Ordinariate Community at St. Margaret Parish.

With Father Liias' ordination, the ordinariate currently has 32 priests, more than 1,630 people, and 37 communities across the United States and Canada. Its ordinary, Msgr. Steenson, is a former Episcopal bishop who is based in Houston, Texas. Two additional ordinariates are located in the United Kingdom and Australia.

"The Vatican thought this possible because the Anglican Church has so many similarities with the Catholic Church, so there is a kind of orientation to be Catholic already there," Msgr. Steenson said.