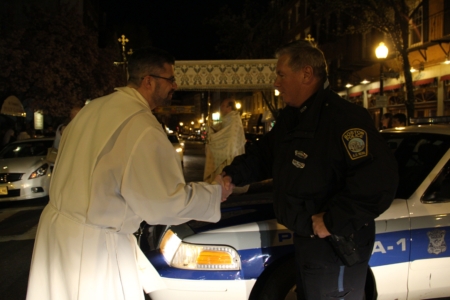 Father Matt Williams, director of the Office for the New Evangelization of Youth and Young Adults, shakes hands with the police officer who provided an escort for the eucharistic procession through the North End, April 20, at the sixth annual Archdiocese of Boston Eucharistic Congress for College Students and Young Adults. Pilot photo/Christopher S. Pineo

NORTH END -- Organizers considered cancelling the sixth annual Archdiocese of Boston Eucharistic Congress for College Students and Young Adults due to recent events, but were able to prevent cancellation when the Boston Police Department provided a detail officer for the second evening of the event.

Officials announced the cancelation of the Friday-evening portion of the Eucharistic congress, April 19, during a nearly 24-hour manhunt on Friday -- conducted by federal, state and local law enforcement including many BPD officers in pursuit of armed suspects in the bombing at the Boston Marathon April 15 -- but continued with the events scheduled Saturday, April 20, when BPD provided the officer.

Father Matt Williams, director of the Office for the Evangelization of Youth and Young Adults, thanked the police for their help at the event and in their work protecting the community at the event.

"Can we give it up for our police officers, the Boston Police?" he asked the crowd.

Organizers recognized that officers might be tired after the long hours of searching for the remaining suspects and a gun battle in the streets of Watertown.

"So, we went down and we said to them, 'We have got the permit, but we know you guys are spent, and we want to reverence that. You tell us what we should do.' And they said absolutely have the procession," Father Williams said.

The young people, adults, families, religious, seminarians and clergy who attended celebrated Mass with Cardinal Seán P. O'Malley to open the event, and joined him for food catered by the Italian restaurants of the North End after Mass.

"The Eucharist is the remedy to cure our hearts for their fascination with evil, and to give us the strength to love, to make a gift of ourselves. The Eucharist is the source of the Church's life and energy. It is the great treasure that our savior has given us," he said.

Susan Conroy, who served with Blessed Mother Teresa in Calcutta, spoke about her experiences before an evening eucharistic procession.

"I have to say, I can't help but think that if there is ever a time to bring the grace, and peace, and love of our Lord and Savior Jesus Christ to the streets of Boston it is now," she said.

From Sacred Heart Church in North Square, the procession stopped for public adoration near the Paul Revere House, then proceeded north to St. Leonard of Port Maurice Church on the corner of Hanover and Prince Streets where the procession ended with prayer. Father Williams thanked the detail officer of BPD personally.

"He was absolutely wonderful so will everyone pledge to go home and pray for him tonight? He was awesome and just went above and beyond the call of duty, so we are just so grateful to him and all of those involved in the police force, the FBI, and all the different people that helped to keep us safe this past week," he said.