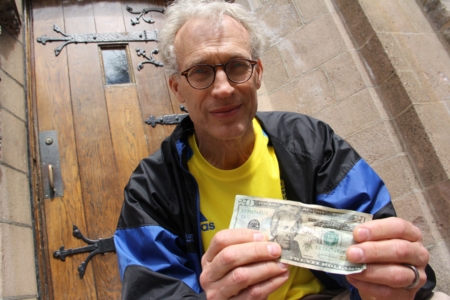 At St. Clement's Eucharistic Shrine, Dr. Joseph Stavas, 58, holds up a twenty dollar bill, with the words "God is Good" written on it, he found crumpled in his shorts the day after tragedy struck at the 2013 Boston Marathon. Pilot photo/Christopher S. Pineo

BOSTON -- Though events at the 2013 Boston Marathon included mayhem and the need for swift action, the father of a heroic runner slowed down to reflect in Catholic prayer the next day.

After experiencing first-hand the events as two bombs exploded at the Boston Marathon, Dr. Joseph Stavas, 58, stopped at the St. Clement Eucharistic Shrine in Boston's Back Bay on April 16 to pray and reflect on the crisis.

He had planned on taking a flight home to Chapel Hill, North Carolina where he works as a physician at University of North Carolina's Center for Heart and Vascular Care, but stayed in town to support his daughter in media appearances later in the day.

"I said, we just need to stop and pray about this and get some inspiration from the Lord to help us work through this, because I think this is where many people come back to search for answers, which there may not be any, for peace, which we pray for, and a better understanding of how this all fits together," he said.

Even with the training of a doctor, the strength of a seasoned runner, and the power of his faith, nothing prepared him for the events he experienced on April 15.

Dr. Joseph Stavas ran the race with his daughter as he has three previous marathons, Dr. Natalie Stavas, 32, who ran toward the sounds of the blast to help victims as soon as she sensed a crisis.

"She just had this intuition that something wasn't right. All we had heard was that there was an explosion at the finish line, and she -- being a few years younger than me and much faster -- jumped over this fence," he said.

Dr. Joseph Stavas and his wife Maureen commented personally on the heroism their daughter showed in the heat of the moment.

Dr. Stavas said his daughter told him that she knew the streets in the area well enough that she could find a way through the crowd, so she could run ahead and try to help in whatever way she could.

"Something triggered her intuition and she said, 'Dad, I know I can get to the finish line,'" he said.

Maureen Stavas said her daughter bravely faced an injury to her foot, but ran the race anyway, before rising to the occasion when tragedy struck.

"They didn't think she was going to be able to run, because she tore the tendon from her foot," she said.

The day of the run did not break the focus of his faith. He awoke that day and reviewed a Catholic prayer magazine.

"I began the day with the Magnificat, which I read every day, and got some inspiration from that," he said.

After his daughter raced off to help at the scene of the explosions, Dr. Stavas realized runners -- jolted to a stop after almost completing the 26.2 mile run -- faced a dangerous situation without time to cool down muscles or maintain body temperature after the extreme exertion.

"We were all jammed up over here on Commonwealth Avenue, and I looked behind me. For, I bet, a mile or so was just a traffic jam of people," he said.

Dr. Stavas and those gathered to watch and cheer on marathoners began helping runners whose temperatures began to drop because of the exertion of a long run.

"Many of the runners who were now stalled out were going through hypothermia, because after 26 plus miles your body goes through this severe physiologic stress," he said.

He said the log-jam of people around him would have prevented any ambulances from helping the runners in danger.

He and others began helping by knocking on the doors of nearby houses to get shivering runners inside for warmth. He said he helped spectators in the immediate area bring an older woman to find warmth in a local restaurant.

"There were many people on the sidelines there that were members of the spectator group, who were handing out water and asking anybody if they needed a cell phone. They were very generous. All the Boston locals, I am sure that's who they were, were very, very helpful and very gracious," he said.

Later on Dr. Stavas reconnected with his daughter. After the incident, media outlets reported on the efforts of Dr. Natalie Stavas to help the wounded after the bombs went off.

On April 16, Dr. Joseph Stavas said he noticed that a small message of blessing had reached him before the race.

"I was getting ready early yesterday in the dark of the morning, to catch the bus at 6:30 from the bus pick-ups, and I grabbed from my billfold a 20-dollar bill, and just sort of scrunched it up in my running shorts. I reached in today, to pull it out and on it was the words, 'God is good.' I just thought that we were truly blessed by angels," he said.

He said that prayer and reflection through his Catholic faith bolstered his training as a runner.

"Prayer is actually a part of my training," he said.

"These runs are long as you are training for the marathon, which could be months, the runs may be 20 to 22 or so miles in distance, and there is a lot of time for reflection. I frequently say the rosary when I am praying, because your body is going through this change. You are going through this struggle. It is a physical struggle, but like anything else in life, struggles can be mental along with physical. They can be spiritual," he said.

"I think God has these tribulations and these 'Heartbreak Hills' that I think we have to go to and struggle over until we can get to whatever finish line we are looking for," Dr. Joseph Stavas said.