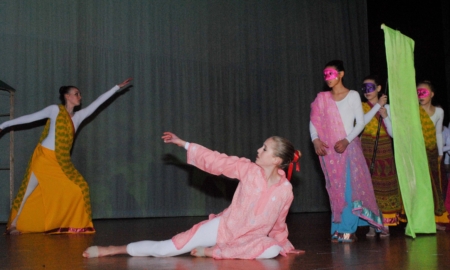 MILTON -- Over 250 participants gathered at Fontbonne Academy April 6 for the sixth symposium offered by the Boston Unit of the Leadership Conference of Women Religious (LCWR) Anti-Trafficking Coalition. Since 2008 this coalition has offered education about the nature, evils and scope of human trafficking.

The focus of this year's symposium was the presentation of "Soul Cry," a compelling display of dance, drama, and media based on a true story of sex trafficking as reported by Nicholas Kristoff in his Pulitzer Prize winning book, "Half the Sky."

"SoulCry" is a production by Accendo Dance Company in partnership with The Arts Movement Student Company. It embodies both the terror and the triumph of 11-year old Meena Khatum. It is a story of horror as well as a story of hope that aims to move audiences as well as inspire them to take action.

The Boston Unit of the Leadership Conference of Women Religious (LCWR) Anti-Trafficking Coalition hosted this performance when they recognized that the mission of Accendo Dance Company resonated with their mission to raise awareness of human trafficking through education, collaborate with others to ensure necessary services with compassion, advocate for justice, and pray for victims and all affected by human trafficking.

Previous symposia have focused on topics ranging from an introduction to human trafficking globally, nationally, and locally; to looking at what one person can do; and learning how our buying power as consumers can become a tool for addressing human trafficking.

The Boston Anti-Trafficking Coalition said they, "offer these symposia because they are convinced that human trafficking is an evil that violates the gospel mandate of respect for the dignity of every human being. It must be eradicated and, despite the many challenges to achieve this, silence is not an option."

At the conclusion of SoulCry, Loralee Scott-Conforti, artistic director for the dance company, invited participants to, "Ask yourself, 'What is one thing I can do?' and then go do it. Put action to your faith and watch what happens."