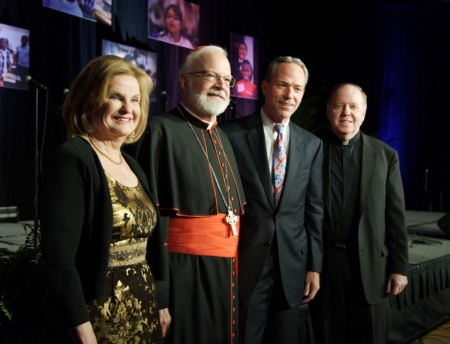 This week (March 27), I was happy to attend the annual gala to support the Inner City Scholarship Fund of the Catholic Schools Foundation.

About 1,000 people attended the gala, which raised over $3 million to support Catholic education in the Archdiocese of Boston. We are very grateful to all who attended and to Peter and Carolyn Lynch who, over the last 20 years, have contributed over $100 million in scholarships to the inner-city schools in the archdiocese.

John Fish was the chairperson for the dinner and Mary Richardson was the emcee of the evening. We were also very fortunate to hear a performance by Ronin Tynan.

During the dinner, Boston College and its president, Father William Leahy, were honored for their work forming a partnership with St. Columbkille School that has been very successful in keeping the school, not only operating, but thriving.

There were two student speakers during the evening: one, a graduate of St. Columbkille's who is now in college and the other was Carlos Tamayo, an eighth grader at the school, an immigrant from Colombia. He did a wonderful job talking about his experience of Catholic education.

Sunday, of course, was Palm Sunday. As I pointed out in my homily, it was also the anniversary of Archbishop Romero's death. Strangely enough, his funeral was on Palm Sunday and this year the date of his funeral and Palm Sunday coincided.

For much of my 20 years in Washington I was working, in great part, with refugees from El Salvador. Priests from the Washington Archdiocese were also working in El Salvador itself -- including one who was sort of a shirttail relative of mine -- so I was very in tune what was happening in El Salvador.

Then, I spent a month at the 1979 Pueblo Conference in Mexico and there I got to know Archbishop Romero well. Then in the years at the Centro Catolico I had a great deal of contact with him.

He was an extraordinary figure in the history of El Salvador. I was always so impressed that every week he would say Sunday morning Mass at the Metropolitan Cathedral in San Salvador. This Mass was a radio Mass and throughout El Salvador even the poorest campesinos had their transistor radios and were listening to his sermon.

As I mentioned in my homily, the day before he was assassinated he had called on the Salvadoran military to obey God rather than their superiors and to stop killing innocent people and to end their oppression of the populace. The next day he was shot at Mass at the Divine Providence Catholic hospital there. I have celebrated Mass at that altar since and it is always very moving for me.

His cause has been introduced for canonization. On Palm Sunday, I talked about his Palm Sunday Funeral Mass, to which thousands and thousands of Salvadorans came. The army threw teargas at them and shot into the crowd killing 40 people. It was just a horrific moment. But Pope John Paul II introduced his cause and I understand that Pope Francis is very interested in moving the cause along. This would be a great thing for the people of El Salvador, who have a great devotion to him. His tomb at the Cathedral has always been revered by the people of El Salvador.

For us, Palm Sunday is always very important because it marks the beginning of Holy Week and, this year, it also comes just after the election of our new Holy Father.

There is a real sense of excitement and enthusiasm for Pope Francis and for his great simplicity and his devotion to the social gospel of the Church -- that same gospel that Archbishop Romero died defending.