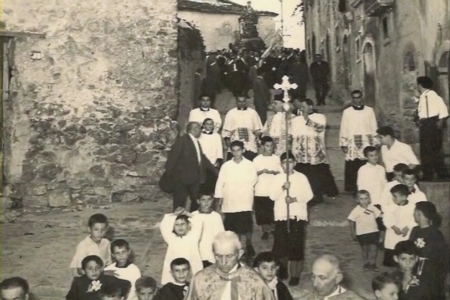 An historic image of the St. Anthony festival procession in Montefalcione, Italy is pictured in this scene from "Patron Saint: The Montefalcione devotion to Saint Anthony." Courtesy photo

NORTH END -- As a boy growing up in the North End of Boston, Christian Anthony Guarino, 28, felt a strong devotion to St. Anthony of Padua, the patron saint of his family's ancestral hometown Montefalcione, Italy.

In 2013 he leveraged some of his North End heritage and turned his devotion to the saint into the documentary film, "Patron Saint: The Montefalcione devotion to Saint Anthony," which he debuted March 15 at his parish, St. Leonard Church on Prince Street.

"I have probably always wanted to make this film," Guarino said.

As a young person he combined his love for the saint and the festival with a passion for capturing images.

"I love cameras, whether it is a still-shot camera or an actual camcorder," Guarino said.

He often filmed the festival in Boston, and some years filmed the same festival traveling with his family to Montefalcione, Italy.

Over time, the collection of "home movies" inspired him to create the film.

He shot, edited and produced the film, which centers on demonstrating the connection between the Italians here and in Italy that celebrate the festival at the same time at the end of August each year.

Since 1919 Italian immigrants from Montefalcione continued the festival after they came to Boston and so preserved a tradition started in the Italian town in 1688.

"It's about a 325 year tradition, so, my ultimate goal was to be informative, to let people know about this tradition," he said.

The film emphasizes the final procession of the statue of St. Anthony on the Sunday finale of the festival. Separated by thousands of miles, both processions begin at the same moment, noon in Boston and 6 p.m. in Montefalcione.

"You could set your clock to it," Guarino said.

He said St. Anthony has always been a "rock" for him and his family.

The film also explores the life of the saint, a Portuguese Augustinian who became a Franciscan in Italy after leaving his homeland and his order to follow St. Francis.

Celebrated for excellent communication of the Gospels in his day, now in popular devotion St. Anthony's intercession is often sought for help in finding lost items.

"That's a real thing, but I think a deeper thing is he can help us find lost faith, lost joy, lost hope, lost peace. You know, when our hearts are just unsettled and when we have lost joy or hope, a prayer to St. Anthony can really go a long way," Father Richard Martignetti, OFM, at St. Leonard of Port Maurice explains in the film.

"He goes before the throne of God and he finds for us what we are most missing," he said.

Guarino said he made the film to demonstrate his love for the saint and his proud feelings for the tradition of honoring the saint in the hometown of his lineage and his hometown in Boston.

A screening of the film is planned for the fall at Suffolk University sponsored by the history department there. Guarino also said he has considered entering the film at cultural film festivals locally.