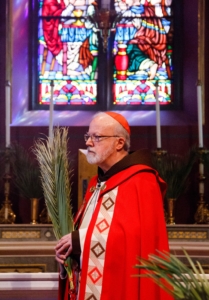 Cardinal O'Malley holds a blessed palm in the Blessed Sacrament Chapel of the Cathedral of the Holy Cross. Pilot photo/ Christopher S. Pineo

SOUTH END ? Cardinal Seán P. O'Malley marked his return to Boston by celebrating Mass on Palm Sunday at the Cathedral of the Holy Cross, after returning from the 2013 conclave that elected Pope Francis in Rome.

After blessing the palms in the Blessed Sacrament Chapel, he celebrated Mass in the main cathedral.

Cardinal O'Malley said in his homily that the keys given to Peter by Jesus had been passed on.

"The keys of spiritual authority that Christ gave to Peter have been passed to a new Peter, an Argentine Jesuit who has taken the name Pope Francis and has captured the imagination of the entire world," he said.

He spoke about the name chosen by the new pope.

"Our new pope has chosen the name Francis, and I am of course delighted. I am very excited that this new name suggests some very important themes for the new pope's ministry," Cardinal O'Malley said.

He said the name signifies not just love for the poor but courage in building peace.

He also marked the murder of Archbishop Oscar Romero, a friend of Cardinal O'Malley, who was killed on March 24, 1980 while celebrating Mass in El Salvador.

The military of El Salvador opened fire on mourners who came to his funeral at the cathedral in San Salvador on Palm Sunday that year.

"When the plaza was emptied out and the smoke lifted, all you could see on the ground were thousands of shoes, and sandals, and palm branches. Let us carry these palm branches with the courage and the joy of those who have gone before us for over 2,000 years of our history of our Church, built by Christ of living stones on the rock of Peter," he said.

"It was one of the greatest homilies I have ever heard in my life. I have been listening to great speakers for a long time, but this was very moving," Former U.S. Ambassador to the Vatican Raymond Flynn told The Pilot afterward.

"You could see the love and the enthusiasm here in this cathedral today for Cardinal O'Malley. It really feels good to have him back home. We admire him greatly here in Boston," he said.