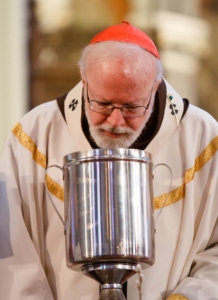 Cardinal O'Malley breathes on the sacred chrism oil, which symbolizes the coming down of the Holy Spirit to consecrate it. Pilot photo/Gregory L. Tracy

SOUTH END -- This year guests joined priests of the Archdiocese of Boston in a tradition of Holy Week as they filled the pews at the Cathedral of the Holy Cross at the annual Chrism Mass, March 26. For many, it was the first gathering with the cardinal since he returned from Rome for the conclave that elected Pope Francis on March 13.

This year students from several schools in the Archdiocese of Boston attended the Chrism Mass. Some said they had rooted for Cardinal O'Malley during the conclave when media labeled him a "front runner" for the papacy.

"He was kind of like a rock star in our class last week," said Katie Teixeira, 5th grade teacher at St. Jerome Elementary School in North Weymouth.

During Holy Week each year in Catholic dioceses throughout the world, the local bishop holds a Chrism Mass where he blesses the sacred oils used to administer sacraments for the coming liturgical year: the oil of catechumens, the oil of the infirm and the sacred chrism.

During the Mass, which is also seen as an opportunity to celebrate priestly fraternity, priests renewed their vows and afterwards gathered for a luncheon with Cardinal O'Malley.

In his homily, Cardinal O'Malley discussed how much he had missed being in Boston, particularly for St. Patrick's Day.

"I did manage to get to the Pontifical Irish College in Rome for a great meal with the Irish community there. No corned beef, our usual Seder meal here in Boston. The food on the plate was unidentifiable but it was green, orange and white," Cardinal O'Malley said.

He also commented on his experience at the conclave.

"The whole pre-conclave atmosphere there, where I was leading in the Italian polls, was quite surrealistic," he said.

He said his apprehension about becoming pope reminded him of St. Patrick.

"I thought of St. Patrick, who was from a Roman family living in Britain. Patrick, as we know, was an Irish wanabee. He was actually an Italian kidnapped by Irish pirates, and I was worried that the Italians were trying to get even," he joked.

The cardinal also remarked more seriously on the attention he received at the conclave as a candidate for the papacy.

"Actually, I was very touched by the Italian people's enthusiasm for your archbishop," he said.

He said that he felt happy and relieved to be back in Boston, but added that the experience brought him to Italy physically also brought him closer to the people in the archdiocese spiritually.

"I felt very close to all of you. I knew that we were united in prayer, praying that the Holy Spirit guide our Church in this important decision. Like those first Christians praying intensely before choosing St. Matthias to be an apostle, to fill the vacancy and pass on the office," Cardinal O'Malley said.

He noted also that for the first time in history, the Ecumenical Patriarch of Constantinople came for the inaugural Mass of the new papacy.

"Patriarch Bartholomew has even invited Pope Francis to come with him to the Holy Land to mark the 50th anniversary of that historic visit between Pope Paul VI and the Patriarch Athanagoras. By the same token, the presence of His Eminence Metropolitan Methodios here today is one more sign of the growing hope for our Churches to be reunited," he said.

He went on to speak about the Acts of the Apostles, and said he thinks of the Holy Spirit as the protagonist of the book.

"Certainly for me the Conclave was a Pentecost experience right out of the Acts of the Apostles," he said.

He said he felt convinced that Pope Francis would keep an unswerving devotion to the poor and the social Gospel of the Church that will in his papacy touch the hearts of many in Europe and North America.

"Here in Boston, we must see ourselves as a continuation of the Church of the Acts of the Apostles, with so many dramatic challenges, we must cultivate a deep trust in the abiding presence of the Holy Spirit to guide and unite us," he said.

"Likewise here in the Archdiocese our thrust toward the New Evangelization and the pastoral plan, Disciples in Mission, must be realized in an atmosphere of prayer and discernment and with a profound trust in the presence of the Spirit to guide the Church," the cardinal said.

He thanked the pastors involved in the first phase of the archdiocesan pastoral plan.

"I am grateful to all the Pastors of the parishes of Phase One, who with great faith and generosity, have entered into the planning process, making sacrifices for the sake of the greater good," he said.

He spoke about a priest's role as a teacher also.

"As priests, our love for the Mass and Eucharistic devotion are what nurture our friendship with Christ and our priestly identity as men of faith and best friends with Christ," he said.

"The priest as a man of faith is to be a teacher of the faith. There is so much illiteracy in today's world. Our service as preachers and teachers of the Catholic faith is crucial for the life of the Church," the cardinal said.

He said at Christmas he sent priests the book "Defending the Faith Without Raising Your Voice" and called the book a wonderful primer "on a new way to broach the difficult topics that confront us and at time cause people to become estranged from the Church."

He encouraged the priests to continue their ministry with the example provided by Pope Francis, in his work for the poor.

"I am confident that Pope Francis' love for the poor and his passion for the social Gospel will help galvanize the Church to a greater fidelity to the Gospel and a renewed commitment to building a civilization of love," he said.

In closing he reminded the priests of the importance of fraternal unity between them.

"The task of evangelization is advanced by our unity or hindered by the lack of it. As we renew our priestly promises today, let us ask the Good Shepherd to make us one in our priesthood. Let us be joined in an intentional presbyterate that will allow us to be of one heart and one mind as we strive together to be men of faith, priests of Jesus Christ," he said.

Greek Orthodox Metropolitan Methodios of Boston attended the Mass in a sign of solidarity with the Catholic clergy, a tradition he and Cardinal O'Malley have honored in recent years. He also gave words of support for the cardinal.

"Your Eminence, permit me a public confession. While you were in Rome the Orthodox were rooting for you, but we were also praying that God lead your steps back home, because this is where we want you to be," Metropolitan Methodios said, in remarks after the Mass.

See more photos of this event at photos.pilotcatholicnews.com.