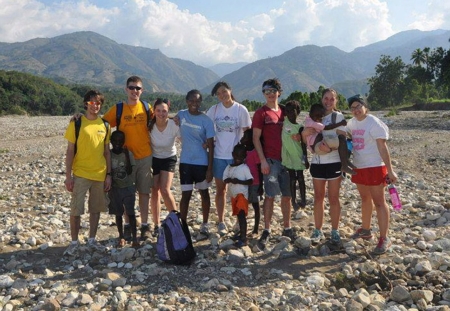 BOSTON -- Looking down at his phone on March 13, Boston University Catholic Chaplain Msgr. John McLaughlin told the students visiting St. Francis of Assisi Catholic Church in Grand Goave, Haiti with him that there was a new pope.

"It was a great blessing to find out on the trip, and a great affirmation of what we were there to do," Benjamin Pritz, a junior at Boston University majoring in biomedical engineering and pre-medicine told The Pilot.

Dorothy Adams, a BU senior majoring in speech pathology, was thrilled when she found out about the new pope and his special commitment to the poor. "I definitely feel like part of the Christian life is serving people," she told The Pilot.

Adams and Pritz were part of a group of eight Catholic students from Boston University who spent their March 10 to March 17 Spring Break in Haiti helping to build the "BeLikeBrit" Orphanage.

On Jan. 12, 2010, Britney Gengel, a 19 year-old student at Lynn University, on a trip to help orphans in Haiti sent her family a text message, "They love us so much and everyone is so happy ... I want to move here and start an orphanage myself."

About three hours later, she was dead, killed in the 7.0 magnitude earthquake that hit Haiti that day and killed almost a quarter of a million people. Her devastated family decided to continue her dream, and to build the "BeLikeBrit" orphanage.

"I thought I'd take some BU kids down there to help," said Msgr. McLaughlin, a longtime supporter of the foundation set up by the Gengal family.

"Our kids did a great job," he said. "It was a great learning experience for them. They worked very hard, and ... it is an experience they will never forget," he added.

Thomas Murphy, an intern at the Boston University Catholic Center and an organizer for the trip, will never forget the countless number of orphans who constantly wanted to be picked up and to play with the students, he said.

"They just wanted to be loved," he said. It spoke to him as a "fantastic example of God's unconditional love for us, and we definitely saw that in the kids' faces," he said.

"Going on the trip ... has definitely encouraged me to reconsider a pediatric specialty," said Pritz. He hopes to attend medical school after college.

The students worked every morning for almost five hours in 80 degree heat to build extensions to the security walls that surrounded the orphanage.

"The work was real tough ... but it was very rewarding," said Murphy.

"We all got really good muscles by the end of it," said Pritz.

The chaplain explained that it was important to build the security wall for the orphanage because unfortunately it is "kind of like in the wild west," he said. "You don't know what's going to happen."

In the afternoons, the group took excursions to explore the area and meet the local residents.

On one such trip, they helped to rebuild the house of a man who had next to nothing, crafting a little table with chairs, and supplying him with purchased household supplies.

"Seeing people living in stick huts with tarp on them, a lot of them going a day without a meal, children running around with no clothes on, no shoes, no clean water ... was very hard to deal with in thinking about all the things I have here at home," said Adams.

Coming back to Boston, she experienced a greater sense of the people around her, looking up in their eyes, smiling at them, and trying to love them in small ways, she said.

In Haiti they had a "greater sense of community in helping each other out," she added.

The trip to Haiti reminded Murphy that relationships are so important in life.

"We're called to love our neighbor as ourselves, and I think that in the U.S. we forget to do that so often, but the Haitian people understand what that means," he said.