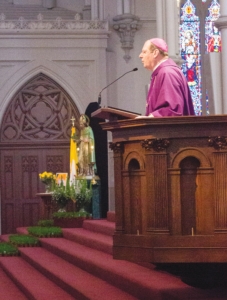 Bishop Robert P. Deeley delivers his homily while in the distance can be seen the statue of St. Patrick surrounded by shamrocks, the papal flag and a portrait of the newly elected Pope Francis. Pilot photo/Christopher S. Pineo

SOUTH END -- Though the vestments were Lenten purple, there was plenty of Irish green to be seen at the cathedral on March 17, St. Patrick's Day.

Traditional Irish airs played by harpist Kathleen Gilday welcomed those gathered in the nearly full cathedral, and set the Irish theme. Bagpipers played a tune just before the procession began the Mass, which was celebrated in English and Gaelic.

The processional hymn "Dochas linn Naomh Padraig" set the Irish tone, followed by "Prayer of Saint Patrick" as the communion anthem, and "Lady of Knock" as the hymn of thanksgiving.

The day's readings were proclaimed in Gaelic and English.

"Though we are surrounded by the color green let in by the light of Christ, the music of Ireland, and the shamrocks as we gather this morning, we are reminded by the vestments and in Scriptures that in what we are doing today we are also still in the season of Lent," said Bishop Robert P. Deeley who celebrated the Mass this year.

Cardinal Seán P. O'Malley was still in Rome after the conclave that elected Pope Francis.

Bishop Deeley reflected on the life of St. Patrick in his homily for the Lenten Mass, but also welcomed the news of Pope Francis' election on March 13.

"Everything we have heard of Pope Francis is a sign that he will be the kind of leader of the Church who will lead us to the Lord. His humble presentation of himself to the world was a picture of a man of humility, who truly has spent time with Jesus," Bishop Deeley said.

The Gospel reading, John 8:1-11, concluded with Jesus telling an adulterous woman "Neither do I condemn you. Go, and from now on, do not sin anymore."

Bishop Deeley continued upon the theme of forgiveness as he included the life of St. Patrick and other bits of Irish tradition in his homily.

Born in Britain in the 4th century, St. Patrick was captured by pirates and sold into slavery in Ireland at age 16. In his early 20s he escaped captivity, but later returned to Ireland, not to seek revenge, but to preach the good news of the Gospel.

Bishop Deeley presented St. Patrick's forgiveness as an affirmation of God's love in the Christian tradition. The saint paid back his enslavement with service, Bishop Deeley said.

"Live like St. Patrick, filled with the love of God that he found with Jesus Christ, and anxious to bring the Good News to others," Bishop Deeley said.

After his homily Bishop Deeley blessed the shamrocks on the steps of the altar in front of a statue of St. Patrick that are distributed each year at the Mass.

The recessional hymn was "Long Live the Pope."

People from different parts of the world, different churches, and across the country had come to the cathedral for the celebration that day.

Ray Orozco, a firefighter and parishioner at the parish of St. Francis in Riverside, Calif. said he was visiting Boston that weekend. He said back home the big news in his family was that the new Bishop of Rome took the name Pope Francis.

Orozco wore a green t-shirt honoring firefighters, and said he and his friend came to Mass before heading out to Boston's St. Patrick's Day Parade.

"I was really impressed. I liked the opening with the bagpipes, the blessing of the shamrocks, and some of it is being said in Gaelic. I thought it was really well done," he said.