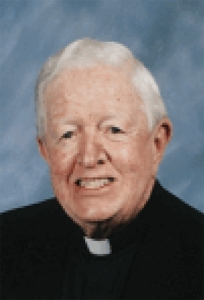 Father William B. O'Connor, 90, former longtime pastor of St. Clare Parish in Braintree, died March 14 at the Marian Manor Nursing Home in South Boston after a period of declining health.

Born in Roxbury and raised in Dorchester, he was one of three children of Daniel and Annie (Kennedy) O'Connor. He was the brother of the late John T. O'Connor and the late Anna (O'Connor) Hawko.

Father O'Connor was a graduate of Boston English High School and attended St. John's Seminary in Brighton. He was ordained to the priesthood on May 1, 1947 by then-Archbishop Richard J. Cushing.

In February 1957, he entered the U.S. Navy Chaplain Corps where he served for nearly 23 years. Upon retiring from the Navy as a captain in 1979, he was assigned to St. Clare Parish in Braintree, the parish he would serve for the rest of his active ministry.

He became pastor of St. Clare's in 1981 and remained as pastor there until he was granted senior priest/retirement status by Cardinal Bernard Law on June 30, 1997. He also was a resident of Stoughton for over 34 years.

Father O'Connor enjoyed his work as a priest and also enjoyed golfing, traveling and sports. In his free time, he enjoyed spending time with his siblings, nieces, nephews and great nieces and great nephews.