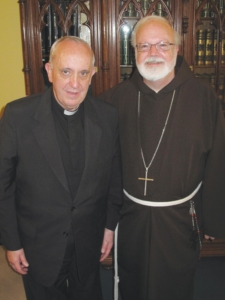 'For us, the Holy Father is a great blessing... It was my privilege to visit him a couple years ago.' Photo courtesy/CardinalSeansBlog.org

This week we rejoice in the election of our new Holy Father, Pope Francis! For us, the Holy Father is a great blessing, the first pope from the American hemisphere and, being Hispanic, he is from a part of the world where almost half of the Catholics reside. He is a man who has been very much dedicated to the poor and announcing the Gospel in difficult situations. We know he will be a great blessing for our Church.

It was my privilege to visit him a couple years ago. I had met him in different meetings over the years and when I had to make a trip to South America for the US Bishops Conference to visit projects in Paraguay that are funded by the collection for Latin America, I had to stop in Argentina on the way, where I was his guest and had a wonderful visit with him. On that occasion, he gave me a beautiful recording of the Missa Criolla, the Argentine Mass.

Then, in the afternoon, the conclave began. We all had to go to the Domus Sanctae Marthae where we were sequestered for the duration of the conclave. That afternoon, we went to the Pauline Chapel where we prayed and then went in procession to the Sistine Chapel, chanting the Litany of Saints When we arrived at the Sistine Chapel there were more prayers. We received a second meditation from Maltese Cardinal Prospero Grech. Then we had the first "scrutinium," or scrutiny, as the vote is called. The first scrutiny was inconclusive so the ballots were burnt and the black smoke was visible Tuesday night. Wednesday, we went once again from the Domus Sanctae Marthae to the Sistine Chapel where we had prayers and two scrutinies in the morning.

During the votations, each cardinal went up by order of seniority, holding their ballot in their hand. Before placing the ballot in the receptacle on the altar, each cardinal took a vow -- standing before Michelangelo's scene of the Last Judgment -- calling on Christ to be our witness in promising that we would only vote for the person we felt God really wanted for the office of Holy Father. It is a very moving experience. Neither of those two scrutinies were conclusive.

Between the morning and afternoon gatherings we went back to the Domus Sanctae Marthae. Cardinal Bergoglio and I sat together for lunch. I could see he was under a lot of pressure at that point, and he did not eat much! Then, in the afternoon, we returned to the Sistine Chapel for more prayers. We had two more scrutinies there and, on the second vote, the Holy Father was elected.

Without having discussed it with the Holy Father, I think that there are some themes from the life of St. Francis that he is trying to communicate by choosing this name.

One of the themes of Francis's life is the call to rebuild the Church, which is a call to reform, to deepening our conversion to the Lord. And even in his homily yesterday, the themes he talked about were walking, building and confessing. This reinforces my belief that this is one of the aspects of Francis's life that he wants to stress. Another theme would be Francis's theme of universal brotherhood. He talked about that in his comments from the balcony of St. Peter's Basilica: of making a world where we are brothers and sisters to each other. St. Francis, of course, saw himself as a brother to all of creation and to everyone. St. Francis also had a special love for the poor, who are a sacrament of the crucified Christ. The Holy Father, in his ministry as archbishop has been so dedicated to the poorest of the poor. I think we will see a continuation of that in his pontificate.

Then, each of the cardinals went up, kissed his ring and greeted him. Afterwards, we prayed the Te Deum, the traditional Catholic prayer of thanksgiving, and the Holy Father was taken away, vested in his white vestments, and went to the chapel to pray privately. It was then that the ballots were burnt and the white smoke and bells and announced to the city of Rome and to the world that the new Holy Father had been elected. We then went to the loggia overlooking the Piazza of St. Peter's accompanying the Holy Father. Being on the balcony looking out was just an impressive sight, with hundreds of thousands of people cheering, waving flags and taking pictures. The energy of the crowd was just incredible when they saw the Holy Father.

He gave a very warm and simple greeting to the people and asked for prayers for Pope Benedict and then asked for a moment of silence and asked for the people to pray for God's blessing upon him. He led the people in the Hail Mary, the Our Father and the Glory Be. This, for me, was a very moving moment because it occurred to me that these very simple prayers are the ones that every Catholic knows, whether they be illiterate or a rocket scientist, whether they are children or elderly. These are the prayers that unite us as a Catholic people in our life of faith and worship of God. ...after giving his blessing Urbi et Orbi, he returned with us to the Domus Sanctae Marthae, where we had a festive meal with him.

There seems to be a great deal of interest in the process of burning the ballots. After each scrutiny, they burned the ballots strung together a needle and thread, so that everything is destroyed. And they also burned all the papers that we used -- for example anything you may have taken any notes on. It was interesting to enter the Sistine Chapel and see they had built this big contraption with all kinds of copper pipes going up to the ceiling that of course is never there otherwise. One question I have been asked is if there was smoke in Sistine Chapel when they burned the ballots. During one of the scrutinies there was a little smoke. I understand that in the past it could be very smokey, but this time there was just a little bit that one time. It certainly is an extraordinary venue. For 500 years this has been the venue the cardinals have used to elect the new Holy Father overseen by the whole of salvation history, beginning with the famous Creation of Adam -- which was right above where I was sitting -- to the very dramatic depiction of the Last Judgment. On any given day, between 20,000 and 30,000 people visit that Chapel.

We have been so blessed in the last century and a half with so many exceptional and holy men who have led us in the Catholic Church, though each of them was so different from the one who came before. I think that is what we see here. Someone told me the Italians have an expression, "After a fat Pope, a thin Pope" which shows that each one is different and each one has different gifts that they bring to their ministry in the Church. I am sure that Pope Francis, just as Pope Benedict, will share with us the wonderful gifts and talents that God has given him to be put at the service of God's people.