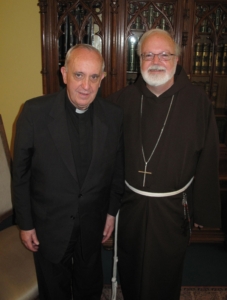 Below is a statement from Cardinal Seán P. O'Malley, on the election of Argentine Cardinal Jorge Mario Bergoglio as Pope Francis I.

I join my brother Cardinals in giving thanks to God for the election of Pope Francis I, the 266th successor of St. Peter and Vicar of Christ. The clergy, religious and laity of the Archdiocese of Boston celebrate this blessing for the Church.

At Caesarea Philippi, Jesus commissioned St. Peter, the rock upon which the Church would be built. Pope Francis continues that mission in an increasingly secular culture, where many people have not come to know or have forgotten that Jesus is our Savior and Redeemer. The world will greatly benefit from Pope Francis witnessing Jesus' call for us to love God and love one another. We pledge our faithful support for the Holy Father as he leads the Church in proclaiming the New Evangelization, inviting all people to a develop a closer relationship with Christ and to share that gift with others.

May God grant Pope Francis the grace and strength to lead the worldwide community of more than one billion Catholics. The Holy Father has already shown us his deep humility in the invitation to pray with him, for him and for the Church. We pray that the Holy Spirit, who led us to choose the Holy Father, will guide him in witnessing the eternal truths of our faith.