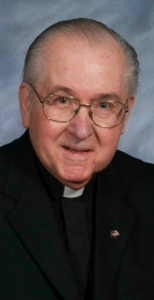 Father Joseph S. Lukas passed away on Feb. 26 at South Shore Hospital. He was 90 years old.

Born in Waltham on May 24, 1922 and raised in Boston, he was one of three children of Stanley and Viola (Krause) Lukas. He was the brother of Alice Lukas of Braintree and the late Mary Jamiol -- who passed away three days before her brother, on Feb. 23.

Father Lukas attended Boston College before entering St. John's Seminary and was ordained to the priesthood by Archbishop Richard Cushing at the Cathedral of the Holy Cross on June 14, 1946.

On Jan. 19, 1971, he was appointed pastor of Sacred Heart Parish in Ipswich, where he served for over 26 years, until being granted senior priest/ retirement status by Cardinal Bernard Law on July 1, 1997.

He also served as a U.S. Navy chaplain, attaining the rank of commander.

His funeral Mass was celebrated March 4 at St. Clare Church in Braintree. Interment was at Calvary Cemetery in Waltham.

In addition to his sister, Alice, Father Lukas is survived by his nephews Leonard Jamiol of Braintree, Gregory Jamiol of Medford and his niece Valerie Strazdas of Braintree.