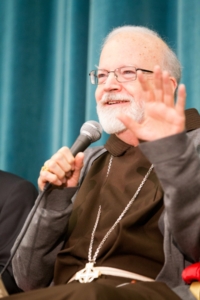 ROME -- Despite being a cardinal and donning the traditional garb of that office, as seen recently in news images from Rome, Cardinal Seán P. O'Malley can often be seen wearing the brown robes of a Capuchin Monk.

At a press conference at the Pontifical North American College in Rome on March 5, a reporter asked a question on behalf of her daughter, who she said wondered, "Are you going to wear your 'cappuccino robes' if you are elected pope?"

Cardinal O'Malley joined the Order of Friars Minor Capuchin in his early 20s, took his first vows in 1965, his perpetual vows in 1968, and remained dedicated to the model of St. Francis and the order even after his 1984 appointment as coadjutor bishop of St. Thomas in the United States Virgin Islands.

"As far as your daughter's concern, I have worn this uniform for over 40 years, and I presume I will wear it until I will die, because I don't expect to be elected pope," he said.

In 2006, Pope Benedict XVI made then-Archbishop O'Malley a cardinal, granting him the traditional red and black garb of the office; but during his time in Boston, Cardinal O'Malley has continued wearing the brown robes of his order at many public events.

"I don't expect to have to change wardrobe," he said.