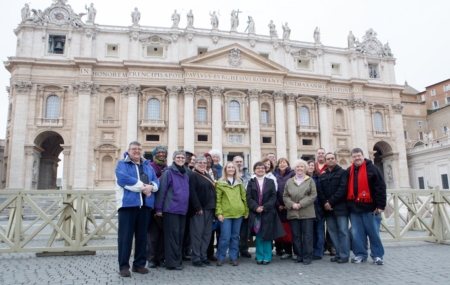 A group of pilgrims from St. John's Seminary's Masters of Arts in Ministry program are pictured in front of St Peter's Basilica, March 5. The group, led by Father Chris O'Connor, vice rector of St. John's Seminary and director of the Theological Institute for the New Evangelization, are there by 'happy coincidence' after planning this pilgrimage a year ago. Pilot photo/Gregory L. Tracy

ROME -- It was "happy coincidence" and "divine providence" that brought a group of Boston pilgrims to Rome during the historic period of the Sede Vacante, according to Father Chris O'Connor, vice rector of St. John's Seminary and director of the Theological Institute for the New Evangelization.

Father O'Connor is leading the group of Boston pilgrims from the seminary's Master of Arts in Ministry program on a pilgrimage that began last week, tracing the steps of Blessed Pope John Paul II from Poland to Rome.

According to Father O'Connor, the pilgrimage had been planned for over a year. The group arrived in Rome March 4 and will remain in the city until March 9.

Some members of the group spoke to The Pilot in St. Peter's Square March 5 after celebrating a morning mass inside the basilica.

The trip was the first experience of visiting Rome for Michael Ruane of St. Michael parish in North Andover.

"It is just an incredible experience to be here because, number one, it is my first visit here, and number two, it is such a historic time. It is an incredible feeling," he added.

Aldona Lingertat, director of the Masters of Arts in Ministry program, said she took the opportunity of being at the Vatican to purchase special commemorative "sede vacante" stamps issued by the Vatican Post Office during the interregnum.

"It is very unique to be here at this time when the seat is vacant. I just bought stamps at the post office and the Italian press interviewed me because this is such a unique space of time that even a stamp was issued with no pope on it," Lingertat said.

A number of the pilgrims also mentioned that they had been told by Italians they met on the trip that the country seems to be in "a time of loss," a time with no Italian government formed in the wake of recent secular elections and the Chair of Peter empty.

"Some of the Italians in the city have said to us that they feel orphaned, and it has been great to remind them that they are not orphaned, that Christ is present here and that soon we will have another Holy Father," said Father O'Connor.

"I think this is a very special moment in the history of our Church. We have talked about there being no pope, there is no (Italian) government, but what we appreciate is the faith that people still have, and still flock to Rome to this great center point of Christendom," said Flynn Fernandes of Sacred Heart Parish in Quincy.