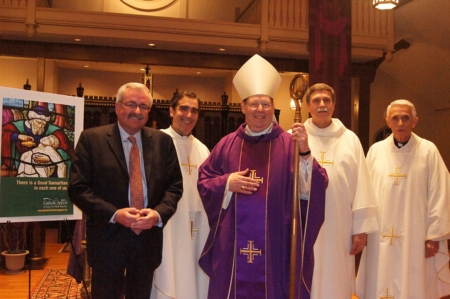 At St. Mary of the Assumption Parish in Hull, appeal coordinator Neil Buckley poses with his pastor Father Joseph M. Mazzone, Vicar General of the Archdiocese of Boston Bishop Robert P. Deeley, Deacon James C. Theriault, and Father Ed Condon, after a Mass to launch the 2013 Catholic Appeal ''There is a Good Samaritan in Each of Us'' on March 2. Pilot photo/Christopher S. Pineo

HULL -- With Cardinal Seán P. O'Malley in Rome for the conclave to elect the next pope, Vicar General and Moderator of the Curia Bishop Robert P. Deeley took up the charge to launch the 2013 Catholic Appeal themed "There is a Good Samaritan in Each One of Us" at St. Mary of the Assumption Parish in Hull.

Bishop Deeley also celebrated Mass at St. Rita Parish in Lowell the next day as the appeal launch continued throughout the Archdiocese of Boston.

Other parishes in the archdiocese received a recorded message from Cardinal O'Malley to play for parishioners at Masses that weekend.

"One of the most well-known parables begins with a simple question, 'Who is my neighbor?' Jesus' reply to this question gives life to the story of the Good Samaritan, who stopped amidst his travels on the road to Jericho to care for a badly wounded man he did not know. As Catholics, we are called to embrace the example of the Good Samaritan by living out Christ's greatest commandment, to love God and to love our neighbor as ourselves -- including those we may not know," the cardinal said in the recorded message.

"I was delighted to get a phone call that Bishop Deeley would be able to come here to represent Cardinal Seán, whose intention it was to be here on this day. As we all know he is in Rome with a very important job right now," Father Mazzone said.

"He is -- like I like to tell people -- the eyes, ears, and voice of the cardinal, especially when he is away. So, we are pleased to have him here," he said.

The vicar general developed the theme of charity in the context of Lent as a time of renewal, when Catholics can renew their commitment to the Gospel through the example of the Good Samaritan.

"This year's annual archdiocesan appeal calls us all to be Good Samaritans, by generously living out the great commandment of love of God and love of neighbor. Jesus makes it clear to us that our neighbor is anyone in need, not necessarily someone we know. Their need has a claim on our love," he said.

He pointed out the importance of community in advancing the ministries supported by the appeal.

"As Christ's followers we are not alone. We are part of a people, a Church, where we have responsibilities to God and to each other. Part of our mission is to practice the works of mercy, and pass on the truths of the Gospel to future generations," Bishop Deeley said.

"As a Catholic community, we come together to pool some of our resources in the Catholic Appeal. It supports the 50 ministries of our archdiocese, to help enrich parish life, advance Church leadership, strengthen families, inspire future generations, and make a meaningful difference in the lives of thousands," Bishop Deeley said.

After Mass, Father Mazzone recalled the ordination of the vicar general as a bishop at the Cathedral of the Holy Cross, Boston in January. The pastor recalled two letters the bishop mentioned reading before his ordination to the episcopacy.

He said Bishop Deeley's demeanor reflects a love for his role as a priest even as he serves the archdiocese and its faithful as a bishop.

"I think it is clearly evident in you what joy you take in your priesthood, and I think it really draws normal people closer to our loving God, closer to Christ. Thank you for that," Father Mazzone said.

The Catholic Appeal is the primary philanthropic funding effort supporting the work of the Church in the Archdiocese of Boston. Through the appeal, Catholics help sustain the vital ministries serving our 288 parishes in 144 cities and towns, 121 Catholic elementary and secondary schools, and thousands of Catholics of all ages in many life circumstances. These ministries are made possible by the generosity of parishioners who want to ensure that they remain strong.

The website www.BostonCatholicAppeal.org provides information about the programs and ministries supported by the Catholic Appeal and ways to give.

"During this holy season of Lent, we join with Catholics worldwide to deepen our faith and make Christ's presence known in our daily lives. The 2013 Catholic Appeal offers a timely invitation to help support the 50 ministries of our archdiocese," Kathleen Driscoll, secretary for institutional advancement, said in a statement.