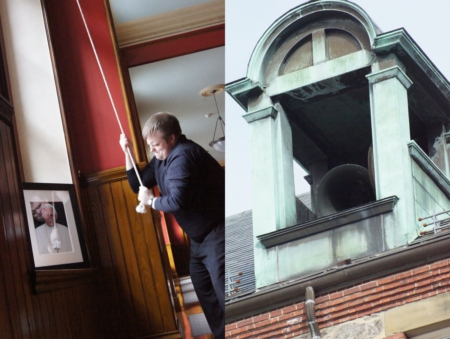 BRIGHTON - Ask not for whom the bells tolled in the Archdiocese of Boston during the final eight minutes of the pontificate of Pope Emeritus Benedict XVI, Feb. 28, because they did not toll at all.

According to the seminarians who hauled on the rope in the great hall at St. John's Seminary in Brighton, the bell rang with a pace quickened and bold, closer to what bell-ringers call a peal, as opposed to a toll, which rings out at a pace steady and solemn.

Bell-ringers at the seminary said they did not ring the bells as fast as they could, in a full peal.

They did not ring the bells celebrating the end of the papacy, but announcing it, nor were they mourning the passing of a pope, so tolling the bells would not do either.

"A toll would be something you would hear for a funeral. Obviously, in this case the Holy Father is still living although he has resigned the office, so we don't do a funeral toll in that situation. We do what would be more called a peal, which is what you heard with the ringer hitting on both sides of the bell," Boland said.

Ringing the bells for the final minutes of the papacy took eight minutes - one minute shy of three rounds of boxing, or two minutes longer than a full Olympic freestyle wrestling match - of continuous exertion, so two seminarians alternated pulling the rope.

"Eight minutes would be a long time for one person to ring a bell, and our bell is a descent size, so it would be a little heavy," Peschel said.

"It is a good arm workout at the very least," he said.

Msgr. James P. Moroney explained the theological significance of ringing the bells from 1:52 p.m. until 2 p.m., the final eight minutes of the end of an eight year papacy.

He said Cardinal Seán P. O'Malley requested the bells to ring at that time.

"His eminence had asked the seminary and all of the parishes, in fact all of the institutions of the archdiocese to ring the bells for eight minutes because of the eight years of the reign of Pope Benedict XVI. Eight years ago at the beginning of April, when the Holy Father first came out on the balcony and was introduced to the world as Pope Benedict XVI the bells of St. Peter's rang, just about an hour and a half before he came out on the balcony, as the white smoke came up the chimney the bells rang. The bells are a way of the Church announcing to all the world with great joy that we have a pope, and now ringing for eight minutes, we announce to all the world, and in fact to God in his heaven, that we are grateful for the pope whom we have enjoyed for the last eight years," he said.

After the bells went silent, Msgr. Moroney removed a photo of Pope Emeritus Benedict XVI from near the entrance of the seminary, and replaced it with a painting of the coat of arms representing "sede vacante," which features an umbrella where in a papal coat of arms the miter or crown would appear.

"Because there is no pope there, no Bishop of Rome resident in the See of Peter, it is replaced with an umbrella as a sign that God's protecting care is still over the Church," he said.