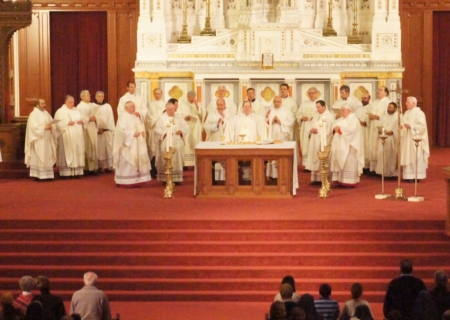 SOUTH END -Vicar general and moderator of the curia Bishop Robert P. Deeley celebrated a Mass of thanksgiving at the Cathedral of the Holy Cross, Feb. 28, expressing the gratitude of the Archdiocese of Boston for the eight-year ministry concluded that day by Pope Emeritus Benedict XVI.

In his homily, the vicar general thanked the faithful, thanked Cardinal Seán P. O'Malley, and thanked the pope emeritus, as he described what the first pope to retire in nearly 600 years means now and in the future.

Bishop Deeley said he had spoken recently with Cardinal O'Malley.

"I spoke with him this morning, and he told me that he had seen the pope by the time we spoke, and that he had conveyed to him the greetings of the archdiocese and assured him of our closeness to him in prayer. So, your presence here this evening, and your presence with us on CatholicTV, and the presence of so many people in the archdiocese today in so many different ways of prayer are an assurance to the Holy Father, as he goes into retirement that we are with him in prayer," Bishop Deeley said.

He described the scene, as he envisioned it, in Rome in the moments as he delivered his homily in Boston.

"As we gather here this evening, here in Boston, it is quiet in Rome. In fact it is the middle of the night. But it is a different night tonight, as the windows over St. Peter's square in the apostolic palace not only have the lights out, but the shutters are closed. The apartment which has been home for the pope for the last eight years is empty. Pope Benedict XVI departed the city as we saw at 5 p.m. Rome time, at the completion of his day at 8 p.m. tonight he relinquished his responsibility as the Bishop of Rome and leader of the Church, supreme pastor of the Church," Bishop Deeley said.

He said the faithful gathered not in a state of disruption created by the unprecedented-in-modern-history retirement, but in a state of peaceful and prayerful contemplation.

"Why? Why would we gather so calmly in prayer? I believe that we recognize that this is a spiritual time. The words of the Gospel sound in our ears and guide our prayer and reflections. 'I pray brothers and sisters, not only for them, but also for those who believe in me through their word, so that they all may be one, as you Father are in me, and I in you, that they also may be in us, the world may believe that you have sent me.' These are Jesus' words," he said as he quoted John 17:21, the Gospel reading at the Mass.

"He is present to the disciples who are there with Him in the upper room, but He is also present to all those who would believe through their name, that is all those like ourselves who have followed the apostles and the successors of the apostles in following Him," Bishop Deeley said.

He said even in this time of "sede vacante," time without a pontiff, the Church anticipates guidance from the Holy Spirit.

"Yes, the windows are closed. The shutters are closed tonight. Pope Benedict is now Pope Emeritus Benedict XVI. He has laid down his arduous ministry, but the Church is not alone. The Church is not lost. Jesus promised to be with the Church. We believe that the Spirit will guide the cardinals in their responsibility to choose a new successor to St. Peter, as has been done in various ways from 64 A.D. until the present," the vicar general said.

"In that confidence of faith and trust in the Lord, we are calmly able to gather this evening to give thanks for the years of Pope Emeritus Benedict's ministry, to pray for the discernment process which is about to unfold, as the cardinals of the Church gather to carry out their tremendous duty," he said.

He said the faithful of the Church believe that the work of the Holy Spirit will manifest at the conclave, where cardinals choose the next pope, guiding the selection of the next successor of St. Peter.

He also addressed the current atmosphere of speculation and argument concerning the election of the next pope.

"Now, there will of course be argument. There will of course be speculation, and there will be wondering about who among the cardinals will emerge and be elected. We are human, and we will therefore attempt to look at the action which begins with the "sede vacante," the empty chair, as a political process. Questions will be asked about who is in the lead, or what positions will he take," Bishop Deeley said.

"It seems that many people as well have their own ideas about what should happen in the Church moving toward the future. The election of a new pope gives them the chance to weigh in. We should be careful to see this process for what it is - the election of a successor to St. Peter who is charged with transmitting the message of the Gospel as it has been received from Jesus Christ by the Church transmitted back to the faithful. The solutions to many of the problems we encounter are found in that sacred message. We need a leader who can help us to understand that," he said.

Bishop Deeley also took time to explain the benefits the Church received in the eight years of ministry of Pope Emeritus Benedict XVI.

"Pope Benedict has given us clear teaching about the continuing importance of the Second Vatican Council and its continuity within the ongoing tradition of the Church. He has spoken on the importance of religion in society, of the complementarity of faith and reason. His addresses in Berlin to the Bundestag, and in Westminster Hall to the political, academic and business leaders of Great Britain, are scholarly exercises enjoining serious questions regarding the future of our society," Bishop Deeley said.

As the vicar general finished his homily, he quoted the pope emeritus not from one of his scholarly or catechetical works created during his papacy, but from a message the pope sent directly to the world, his final tweet.

"May you always experience the joy that comes from putting Christ at the center of your lives," Bishop Deeley quoted the pope emeritus' Twitter account @pontifex - which had tweets removed and the "sede vacante" coat of arms inserted as the photo earlier in the day.

Faithful at the cathedral expressed a sense of hopeful resolve in anticipation of the next papacy as they spoke with The Pilot.

"We do know that the new pope that will be elected will be one that will bring the Catholic community within the world together once again," said Frank Guerrios, 44, a parishioner of Holy Family Parish in Dorchester.

He said his father - who served as a deacon at Holy Family Parish - recently passed away, so the image of the closed shutters on the papal apartment struck a chord with him.

"It is closed momentarily, but it will soon be reopened, very soon," he said.

A missionary to the Archdiocese of Boston with the Neocatechumenal Way expressed a similar sentiment.

"During these times, I know that the Church has gone through some troubles, but I trust that the Holy Spirit is going to do the work, and it is going to bring another holy pope like the Lord has provided in the last two reigns with John Paul II and with Pope Benedict XVI. That is how I feel," said Alicia Burgos, 42.