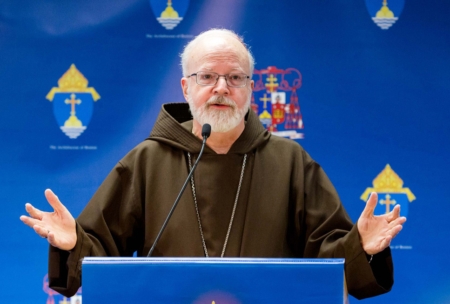 BRAINTREE -- "I must confess I was rather incredulous," Cardinal Seán P. O'Malley said, describing his reaction for the media to the announcement of Pope Benedict XVI's retirement at a press conference held at the archdiocese's Pastoral Center in Braintree, Feb. 12.

The cardinal said he heard the news that Pope Benedict would step down from the papacy Feb. 28 as he was entering an early morning Mass and initially thought the information was a joke or a hoax.

"But, by the time we came out from prayers and Mass, it was in all of the media, and it was obvious that this was really happening. So, I was as surprised as everybody else," he said.

At the press conference, Vicar General Bishop Robert P. Deeley, who worked with then-Cardinal Ratzinger at the Congregation for the Doctrine of the Faith, introduced each speaker and gave brief remarks on the retirement.

"His decision, breathtaking in its originality, also shows the strength of the man and the greatness of his leadership," Bishop Deeley said.

Msgr. James P. Moroney, the rector of St. John's Seminary, gave an explanation of the process of electing a new pope and also offered a personal anecdote about his experience with the pope.

He said at a meeting with the pope he told the pontiff that St. John's Seminary was filled to capacity with talented men seeking ordination. He said Pope Benedict responded that he should tell each man that the pope would pray for them.

"And I know those were not just words. I know he prayed that night for our seminarians, and tried to picture them, as he prayed for all the full Church, most especially all those in need," Msgr. Moroney said.

Cardinal O'Malley began his remarks by reflecting on the papacy of Pope Benedict XVI.

"Pope Benedict is a man who is a great intellectual and very much aware of the currents of thought that are very much present in Europe, in the West, in the secularized countries, or even in our country, the United States," he said.

Cardinal O'Malley also noted the concern of Pope Benedict XVI for the faithful in Boston.

"The Archdiocese of Boston in particular has been greatly blessed by Pope Benedict's care and concern. In all of my conversations with him, he has always asked me to assure this local Church of his prayers and encouragement," the cardinal said.

The cardinal recalled the visit to the United States by the pope during one of the most difficult periods the Church has faced in modern history.

"I will always hold the Holy Father's meeting in 2008 with survivors of clergy sexual abuse, and our presentation of the book of names of living and deceased survivors, as one of the most powerful experiences of my life and ministry," the cardinal said.

After the cardinal's reflection, questions from the media quickly turned to the process of picking Pope Benedict's successor.

Cardinal O'Malley, elevated to the College of Cardinals by Pope Benedict XVI in 2006, will be among the 118 cardinals under the age of 80 who will elect the next pope.

"Obviously, it is the first time that I am going to a conclave, maybe the only time that I will go in my life. It is a great responsibility, and I am trying to prepare myself emotionally for it," Cardinal O'Malley said.

The cardinal sees a lesson in the pope's retirement for the cardinal electors.

"On further reflection, I see that he is telling all of us it's not about the person, it's about the office, it's about the ministry, it's about the pastoral needs of the Church. And of course, going into the conclave, I see that responsibility that we need to try to make a decision that reflects not just a personal choice, but what we really believe is best for God's people," Cardinal O'Malley said.

"It's a huge responsibility, and it is something that weighs heavily on the heart of every cardinal who is going to this conclave, I am sure," he said.

"We see the challenges that the Church faces today, and we can just imagine how difficult his job is going to be, so we want to get the very best person," the cardinal said.

Several times during the press conference, Cardinal O'Malley spoke about the qualities he is hoping for in a new pope.

"I think he has to have the intellectual capacity, and the communication skills, and the organizational skills, and I think the witness of a holy life, and someone who can communicate the joy in living their faith and in their vocation. I think that is important in today's world," he said.

"Obviously we need someone who is a leader, and someone who has a very, very deep faith and can communicate that, and inspire people to a life of discipleship, and to embrace the hard words of the Gospel, and to have an energy about sharing that faith with others," he said.

He also said the new pope would ideally be a strong leader, multi-lingual and have a connection with young Catholics.

Commenting on speculation that the next pope could come from outside Europe, he said, "I grew up in a world where we thought that being Italian was a prerequisite and then, all of a sudden, we had a Polish pope, and then a German pope -- which I think was even a greater surprise. So, obviously, there are infinite possibilities."

Asked if he might be the next pope, Cardinal O'Malley joked, "Well, I haven't lost any sleep about it, and I have bought a round-trip ticket, so I am counting on coming home."