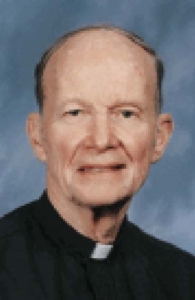 Father Edward L. King passed to the Lord on Feb. 3 Hannah Duston Nursing Center in Haverhill after a lengthy period of declining health. He was 89 years old.

Born in Dorchester on Aug. 20, 1923, he was one of four children of Edward L. and Mary A. (Sullivan) King. He was predeceased by two brothers, Donald and Kenneth, and sister, Mary A. King.

He attended Newton public schools and graduated Newton High School in 1941. Shortly after graduation, he enlisted into the Army Air Corps. A World War II Veteran, he proudly served from 1942 until being honorably discharged in 1946.

Coming home from the service, rather than follow in his father and grandfather's footsteps into professional baseball, he followed a greater calling to the priesthood.

He attended St. John's Seminary and was ordained to the priesthood on Feb. 2, 1955 at the Cathedral of the Holy Cross by Cardinal Richard J. Cushing.

After more than 11 years at St. Clement's, Father King received his first assignment in the Merrimack Region of the archdiocese, where he would continue to serve the for rest of his life.

In May 1976, Father King was assigned as assistant pastor at St. Lucy in Methuen. He remained there for 12 years and, in June 1988, he was made parochial vicar of St. Mary Church in Georgetown. In September 1990, he received his final priestly assignment as parochial vicar at St. James Church in Haverhill. Though he was granted senior priest retirement status on June 1, 1998 by Cardinal Bernard Law, he continued to minister to the people at St. James until 2007, when he became a resident of Nichols Village Senior Living Community in Groveland.

He is survived by numerous nieces and nephews.

Father King's funeral Mass was to be held Feb. 8 at St. James Church in Haverhill. The homilist was to be Father John Leonard and designated concelebrants were to include Fathers Francis Mawn, Frederick McGowan, Charles Higgins and Robert Murray.

Interment will be at Mt. Benedict Cemetery in West Roxbury.