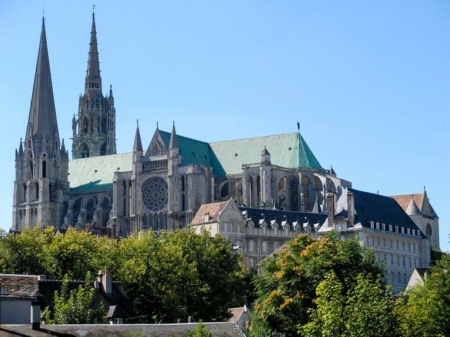 The Cathedral of Our Lady of Chartres, considered one of the greatest example of French Gothic architecture will be subject of a lecture March 12 at Harvard University. Creative Commons image/ MathKnight, Wikipedia

CAMBRIDGE -- American Friends of Chartres, the Standing Committee of Medieval Studies of Harvard University and the patronage of the Consul General of France in Boston, invite Catholics to the Sackler Museum at Harvard University on March 12 for a presentation on the Cathedral of Our Lady of Chartres, in France, and the Catholic tradition of gothic cathedrals.

Paul Crossley, professor emeritus of the Courtauld Institute of Art of London University, will give his talk "Chartres and the Rhetoric of Gothic Cathedrals" in the early evening.

In a letter, Bishop of Chartres Michel A. Pansard encouraged people to attend the event, support the cathedral, and visit the cathedral in France.

"I often detect in visitors the desire to gain a more profound understanding of the meaning and enduring relevance in today's world of a human endeavor such as this, in praise of the glory of God and the dignity of Man," Bishop Pansard said.

"The never-ending interplay between light and stone expresses, stimulates and sustains the faith of each generation of Christians. For those in search of answers, this interplay also provides a path to understanding," he said.

The American Friends of Chartres (AFC) is a non-profit organization created in 2005 to raise awareness in the United States about the Cathedral of Notre-Dame de Chartres; to raise funds to help speed up the preservation work, especially of stained-glass windows; to establish educational exchange programs in the field of historic glass art, and to strengthen ties between the American and French cultural communities.

AFC recently raised funds to clean and conserve the five lancet windows in the south portal. The lancets were recently restored, and AFC is now completing its financial obligations for the project, so pilgrims who make the trip to the Cathedral can see the result of the contributions first-hand.

"In its statuary and stained glass windows, the cathedral also sets out in pictures the story of God's alliance with Man, from the Creation on the North Portal to Judgement Day on the South Portal. The windows begin with Genesis and culminate in the Apocalypse. The essence and narrative of the Christian Creed are included: the incarnation and birth of the Lord Jesus, with the omnipresent figure of Mary, and the Lord's death and Resurrection on the Royal Portal. Finally, we have the saints whose lives were lit up by the Gospel, by which they lived and whose word they spread," Bishop Pansard said.

"There are few who are not struck by the beauty of the cathedral the first time they see it. But the artistic accomplishment, skill and faith of the medieval master builders have left us more than a priceless legacy," he said.