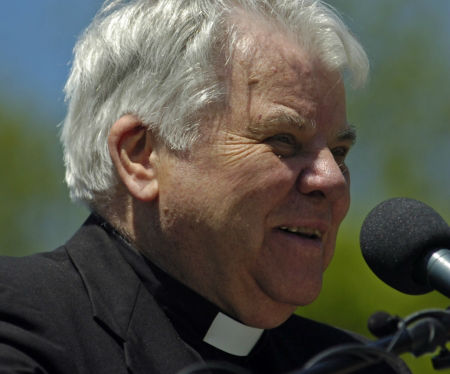 Retired Bishop John M. D'Arcy of Fort Wayne-South Bend, Ind., died Feb. 3 in Fort Wayne at the age of 80. Bishop D'Arcy is pictured in a 2009 file photo addressing a rally at the University of Notre Dame protesting the appearance of President Barack Obama at the university's May 17 commencement in South Bend. (CNS photo/Scott M. Bort)

He was diagnosed with lung and brain cancer in late December while visiting his family in the Boston area. He returned to Fort Wayne in January for care.

In retirement, Bishop D'Arcy had assisted at parishes, conferred the sacrament of confirmation, and enjoyed providing retreats and missions and assisting as chaplain of Bishop Luers High School.

"I am filled with deep sadness at the death of a dear friend and brother bishop," said Bishop Kevin C. Rhoades, who was installed in January 2010 to succeed Bishop D'Arcy. "We mourn the death of a good shepherd after the heart of Christ, a bishop who loved the Lord and his people with all his heart."

"Bishop D'Arcy faced death as he also lived his live: with deep faith and trust in God," the bishop said in a statement Feb. 3. "He offered his prayers and sufferings this past month for the people he loved and served with joy and faithfulness."

The diocese announced that Bishop D'Arcy's body was to be received at St. Matthew Cathedral in South Bend Feb. 6, with daylong visitation followed by a 5 p.m. rosary and a 7 p.m. transferal Mass to be celebrated. The bishop's body was to be received the next morning at the Cathedral of the Immaculate Conception in Fort Wayne, with all-day visitation followed by a rosary and evening prayer.

Morning visitation Feb. 8 was to be followed by noon Mass and a reception. The rite of committal was to be conducted privately in the cathedral crypt.

The son of Irish immigrants, John Michael D'Arcy was born Aug. 18, 1932, in Brighton, Mass. He began preparation for the priesthood in September 1949 at St. John's Seminary in Brighton. He was ordained to the priesthood on Feb. 2, 1957, for the Archdiocese of Boston.

He studied in Rome at the Pontifical University of St. Thomas, known as the Angelicum, from 1965 to 1968 and received his doctorate in spiritual theology in 1968. He served as spiritual director and professor of spiritual theology at St. John's Seminary from 1968 to 1985.

Bishop D'Arcy was ordained an auxiliary bishop of Boston Feb. 11, 1975, and was appointed vicar for spiritual development for the archdiocese at the same time. He continued to serve as a spiritual director at St John's Seminary. Bishop D'Arcy directed the Office of Spiritual Development, which was established by the late Boston Cardinal Humberto Medeiros in 1975.

On July 21, 1981, Bishop D'Arcy was appointed regional bishop for the northern area of the Archdiocese of Boston. He continued as vicar for spiritual development and continued to direct the archdiocesan Office of Spiritual Development.

During his tenure, Bishop D'Arcy established many significant initiatives in the areas of spirituality, catechesis, education, ecumenism and social services outreach -- including establishing the Women's Care Center and Vincent House for the homeless; undertaking ecumenical dialogues with Methodist, Evangelical Lutheran and Jewish leaders; initiating live Sunday television Masses; and starting a eucharistic congress at the University of Notre Dame.

He organized the annual Bishop's Appeal, considered the most successful endeavor of its kind in nation, raising money to support parish and diocesan projects. He oversaw a $3.6 million renovation/restoration of Fort Wayne's cathedral in 1998.

Bishop D'Arcy established the Legacy of Faith capital campaign in 2004-2005, creating endowments of more than $48.5 million for construction of new Our Lady of Guadalupe Church and Diocesan Shrine and related Hispanic ministries; Catholic Charities services to the poor; schools' endowment fund; and an improved retirement program for priests.

He made an independent status for the diocesan newspaper, Today's Catholic. Under his leadership, there were several new church projects and several schools and parishes were renovated and expanded across the diocese. All four diocesan high schools held capital campaigns to improve their facilities.

Bishop D'Arcy established the Office of Spiritual Development, the Office for Hispanic Ministry and the Office of Catechesis. He called for an expansion of campus ministry/young adult programming and initiated annual youth and young adult retreats and retreats for disabled.

Bishop D'Arcy was chairman of the board of directors of Our Sunday Visitor during his years as head of the diocese.

Greg Erlandson, publisher of Our Sunday Visitor in Huntington, said: "Bishop D'Arcy was a good friend of Our Sunday Visitor, supportive of both its publishing and its offertory solutions divisions. He had a particular passion for catechesis and evangelization, and used funding from the Our Sunday Visitor Institute to educate scores of religion teachers and catechists in his own diocese.

"He was a shepherd dedicated to his flock, and when he received news of his cancer, he was resolute in returning home to the diocese," he added.

The Fort Wayne-South Bend Diocese includes the University of Notre Dame, with which Bishop D'Arcy had a strong relationship. That relationship was strained in May 2009 when the university invited President Barack Obama to be the commencement speaker and to receive an honorary degree.

The bishop refused to attend the university's commencement but he celebrated a baccalaureate Mass.

He later said in an article for America that he had never "interfered in the internal governance of Notre Dame or any other institution of higher learning within the diocese." He said the central question was: "Does a Catholic university have the responsibility to give witness to the Catholic faith and to the consequences of that faith by its actions and decisions -- especially by a decision to confer its highest honor?"

A bishop, he said, "must be concerned that Catholic institutions do not succumb to the secular culture, making decisions that appear to many, including ordinary Catholics, as a surrender to a culture opposed to the truth about life and love."

"His life was one of loving service to God's people as a pastor and, since he became the bishop of this diocese in 1985, he has shown dedicated and affectionate care for the University of Notre Dame," Father Jenkins said. "We remember him with gratitude and, though saddened by his passing, we believe he will be an advocate for us in the heavenly kingdom."

Bishop D'Arcy is survived by two sisters: Sister Anne D'Arcy, a Sister of St. Joseph, and Joan Sheridan and her husband, Hugh; and several nephews, a niece, grandnieces and grandnephews.

Johnson is editor and Cozad of Today' Catholic, newspaper of the Fort Wayne-South Bend Diocese.