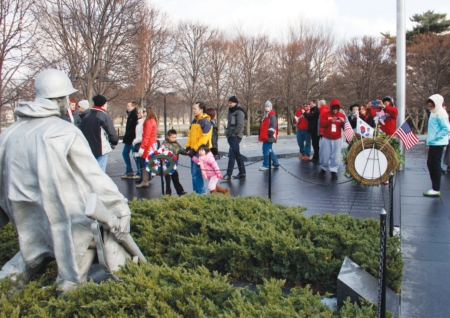 WASHINGTON -- Marching to the steps of the Supreme Court, pilgrims on the Youth Pilgrimage for Life to Washington, D.C. for the March for Life took time to tour some of the sites in the nation's capital.

Many of the group leaders, students and young people who joined the pilgrimage reflected on the different stops at tourist destinations in a solemn way after their experience during the march.

First the group visited Arlington National Cemetery and the Tomb of the Unknown Soldier, where they watched the changing of the guard.

The group also toured the national mall, visiting the war memorials and those dedicated to some of the great advocates for justice for all.

The group visited the Martin Luther King Jr. memorial, a first as part of the pilgrimage since the National Park Service dedicated the memorial in 2011.

"The Martin Luther King memorial was very significant because it says 'out of a mountain of despair, a stone of hope.' And so, just like there is this unfinished work of the rights and freedoms for many people in the country -- certainly African Americans and many immigrants in our country as well -- there is also the unfinished business of working for the rights of the unborn," Father Michael F. Sheehan, FPO, said.

The sculpture depicts a mountain split into three parts.

The pilgrims walked first between two pieces of the mountain; emerging from between the two pieces they saw a third piece, and walked around it to view the likeness of Martin Luther King Jr. sculpted to appear incomplete in the stone cut from the center of the mountain.

Themes at the memorials directed the thoughts of pilgrims to the importance of individual sacrifice in standing up for causes greater than self. One pilgrim commented on the Vietnam memorial and his experience at Arlington National Cemetery.

"You really get the sense that we are on hallowed ground, like this is the most sacred part of our country. It is because of the sacrifices by these men and women who are buried here and whose names are on that wall that we are able to come to D.C. and tell our government that we as followers of Jesus Christ, as part of his Church, as human beings, that we do not agree with what they are doing," Eddie Goodwin, 20, a young adult with the pilgrimage, said.