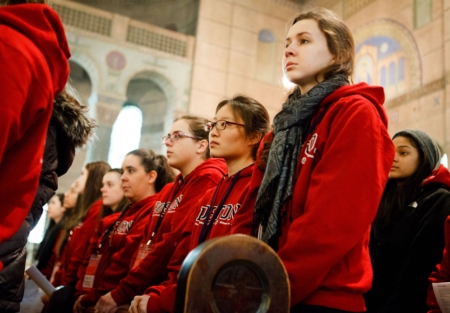 WASHINGTON -- In what has become an annual tradition those from the Archdiocese of Boston in Washington D.C. to attend the March for Life were invited to join Cardinal Seán P. O'Malley at the Shrine of the Sacred Heart for a Mass, Jan. 25, the morning of the march.

"We are called to share the treasures of our faith with others and to witness to the truth of the Gospel. It is that desire, to witness to the Gospel of Life, that brings us here to Washington on this cold morning to join thousands and thousands of our fellow Catholics and other men and women of good will to say to the world that every human life is precious," he said.

The cardinal compared the pilgrimage in support of life with the conversion of Paul, a journey of faith intimately linked with the role of the Church and the faith of the laity.

"Our faith journey is a journey on the road to Damascus. It is always a call to conversion, to overcome sin and selfishness in our lives, so we will be able to love God and our neighbor with greater generosity and love," he said.

He also spoke about the importance of supporting marriage, and for young people working toward the goal of marriage by practicing chastity. He tied his message on marriage directly with the calling to pro-life action.

"Marriage is the sanctuary of life," he said.

The cardinal said the point of defending the Gospel of Life is not to attack those who disagree, but to help those struggling with choices in a world that does not always support life, babies or motherhood.

"Our task is not to judge or condemn anyone, but with love and empathy, to reach out to those in difficult situations and help them to choose life," Cardinal O'Malley said.

In closing he gave the crowd his thoughts on the future.

"You young people are going to face many great struggles in the future. To be faithful disciples to Jesus Christ and his Church has never been easy," he said.

The cardinal closed as he thanked the pilgrims for the sacrifices they made in order to attend the March for Life.

Father Daniel Hennessey, vocation director for the Archdiocese of Boston, followed up the Mass with a talk on the need for vocations in the Church.

"As I look out and see all the young people here, I want to say to you that God has a path for you, and it is possible to know what it is," Father Hennessey said.

"You guys who have ever thought about the priesthood, I am here to say, it might actually be true that God is calling you to serve Him as a priest, and if he is calling you, don't be afraid," he said.

Father Matt Williams, director of the Office for the New Evangelization of Youth and Young Adults, thanked Cardinal O'Malley for the Mass and called for the need to support priests in their vocations.

"The cardinal has never missed a pilgrimage for life. You are 40-for-40; you have been not only an all-star, Cardinal Seán, but a hall of famer," Father Williams said.

Following the Mass, the 500 teens and young adults on the Youth Pilgrimage for Life remained at the church for a rally prior to joining the March for Life.

Mother Olga Yaqob, founder of the Daughters of Mary of Nazareth, spoke to the pilgrims on the centrality of defending life as part of their identity.

She said the Catholic identity calls the faithful to the cause of pro-life.

"We believe that God created every human being in his likeness and image. We are called to be pro-life," she said.

Mother Olga told the crowd that they must each know why they are pro-life.

"In order to be witnesses and ambassadors of God, we have to believe, that every soul, every soul, small or big, is important in the eyes of God and in our faith, because that is what the mother Church wants for all children," she said.

After all the talks, Father Hennessey invited pilgrims to venerate a relic of John Paul II.

"A relic is a reminder to us of the love, devotion and sanctity of that person," he explained to the pilgrims.

He also said that the Church once celebrated Mass on the tombs of the saints, built St. Peter's Basilica over the tomb of St. Peter, and continues the tradition by including relics inside a stone in each altar today.

One high school senior traveling with St. Patrick's in Roxbury said she felt moved by the talk given by Mother Olga, particularly her way of speaking on the Gospel of Life.

"I can tell she is a gentle person and that she loves people, so I was very speechless," Mandy Barbosa said.

Janice Fidalgo, a junior in high school traveling with the same group, said the cardinal's homily moved her because of the focus he put on personal conversion.

"I thought it was important that Cardinal Seán focused a lot on conversion of our own hearts and changing the hearts of those around us, instead of trying to change their opinion towards abortion," she said.