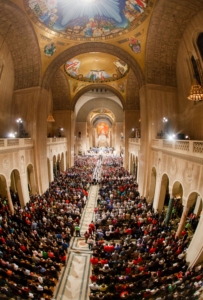 Thousands fill the Basilica of the National Shrine of the Immaculate Conception in Washington D.C. for the Opening Mass for the National Prayer Vigil for Life Jan. 24, the eve of the March for Life. Pilot photo/Gregory L. Tracy

WASHINGTON -- For 34 years Cardinal Seán P. O'Malley traveled to Washington annually to attend the nation's largest pro-life Mass; this year he celebrated that Mass for the first time.

The Opening Mass for the National Prayer Vigil for Life, which is held at the Basilica of the National Shrine of the Immaculate Conception the evening before the March for Life, began with a 45-minute procession as five cardinals, 42 bishops, 60 servers, 80 deacons, 395 priests and 520 seminarians entered the basilica to take their places around the main altar.

By tradition, the chairman of the U.S. Conference of Catholic Bishops Committee on Pro-Life Activities serves as principal celebrant and homilist for the Mass. Cardinal O'Malley was elected to a three-year term as chairman of the committee in November 2012.

"I would like to note that 34 years ago, at the very first of these Vigil for Life Masses held in the crypt of this basilica, the then-Father Seán O'Malley was present," said Washington Cardinal Donald W. Wuerl said, welcoming the near-capacity crowd.

Over 500 students and young people from parishes and schools of the Archdiocese of Boston joined a crowd of 13,000 at the Mass to begin their Youth Pilgrimage for Life to Washington, D.C. for the March for Life.

As he began his homily, Cardinal O'Malley recalled the work of Nellie Gray, the founder of the March for Life to protest legalized abortion who died in August 2012 at age 86.

The cardinal said he worked alongside Gray as a young priest in the 1970s and described Gray as "the Joan of Arc of the Gospel of Life."

"She was an inspiration for myself and countless others. Surely, she continues to pray for us in her place for eternity," he said.

Cardinal O'Malley called upon Catholics to work to change society's negative perception of adoption, so that it is seen as a better option than abortion for women, especially for those facing a crisis pregnancy.

He said the Year of Faith, which runs through November, "is a call to a deeper conversion so we can become effective apostles of the Gospel of life in the new evangelization."

Citing the Gospel reading for the Mass -- Luke 1:39-45, Mary's visitation to Elizabeth -- Cardinal O'Malley said the "the Gospel of life is imperative to Christ's disciples."

"God is urging us to be defenders of life in the midst of the culture of death," he said in urging widespread efforts to change the perception that adoption is a bad choice for women.

"Too many Americans see abortion as a necessary evil," he added. "We need to educate the public about the damage done to women by abortion."

Pointing to the important work done by staff and volunteers at pregnancy centers and programs that support single mothers, Cardinal O'Malley called for broadening such efforts so that women turn away from abortion.

Work also must continue on the legislative and judicial fronts so that legalized abortion comes to an end, he said.

At the same time, he explained, Catholics must work more than ever "to change people's hearts, to help Americans understand that abortion is evil and it is unnecessary."

"It's not just the lucidity of our arguments, but about the effect our words have on others," the cardinal said.

"Our task is to present the truth with civility, empathy and clarity. Being compassionate about the Gospel of Life is about building a new civilization with love," Cardinal O'Malley said.