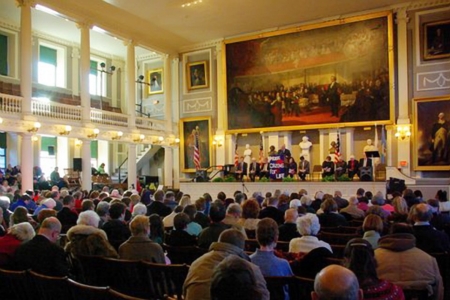 BOSTON -- Less than a quarter of a mile from Boston's New England Holocaust Memorial over 350 Massachusetts residents gathered on Jan. 27, which is also International Holocaust Remembrance Day, to mark a different slaughter of innocents. They came to Faneuil Hall for Massachusetts Citizens for Life's (MCFL) annual Assembly for Life, held this year days after the 40th anniversary of Roe v. Wade.

Jaymie Stuart Wolfe -- a music minister, children's book editor and columnist for The Pilot -- served as the assembly's emcee and encouraged those gathered to visit the Holocaust memorial. She said the site serves as a reminder that ours is not the only society in history to make humanity selective. Then, she played the theme song from the film "Schindler's List" on her violin in memory of the 55 million children legally aborted since 1973.

The program also included the tolling of hand bells by the Blackstone Valley Catholic Youth Choir for deceased pro-lifers, songs sung by the choir, Amazing Grace played on the bagpipes and the "Battle Hymn of the Republic.''

The assembly's featured speaker, Abby Johnson -- a former Planned Parenthood director turned pro-life activist -- was unable to make it due to illness.

In her place, Lynn native Cori Connor-Morse, shared her story. She recalled every detail of the day in 1983 that her son, whom she later named Patrick, was aborted. The mundane facts of what she wore, what she ate and what time she awoke that morning are still with her. She juxtaposed that with the fact that she sometimes finds it difficult to remember such details about yesterday.

Connor-Morse said that the day "I killed the only child I would ever conceive" marked the beginning of depression, panic attacks and suicide attempts. Her survival depended on denial and even her counselors told her that the abortion was not her problem.

It was not until the love of her current husband, Steve, began to heal her stubborn wounds that she made an appointment with a priest. Twenty-six years after her abortion, the priest spoke to her about what she had done, listened to her sob for two hours and encouraged her to go to Project Rachel, the ministry for women who have suffered through an abortion.

Connor-Morse learned through the ministry that "abortion was wrong for all of us." Since her "long process" of healing from abortion began, she has sought to pay forward the help she received. She often prays outside the abortion clinic in Lynn, and last February, she was present when an abortion-minded couple decided to keep their daughter, Eleanor.

"All babies are wanted by someone," she said. "All mothers should be told."

David Franks, chairman of the MCFL board and theology professor at St. John's Seminary in Brighton, said that now is the time for Massachusetts pro-lifers to recommit themselves to the struggle and to intensify their passion.

He encouraged everyone to invite others to join MCFL and to build up its regional chapters. Doing so is the first step toward converting the state legislature to a pro-life body and for Massachusetts again to lead the way to freedom.

Franks quoted the Declaration of Independence that all men are endowed by their Creator with certain unalienable rights, including the right to life. He spoke about the freedom discussed in Faneuil Hall at the country's founding and Massachusetts' role in bringing an end to legalized slavery.

"We can convert this Commonwealth. We can make it consistent with the ideals that were debated in this hall," he said. "We helped break the slave power, and we will break the abortion power too -- if we work."