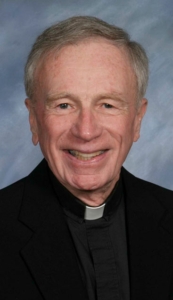 Father Laurence E. Kelley passed away Jan. 18 at his home in Scituate. He was 77 years old.

He was born in Boston on Feb. 22, 1935, one of six children of Joseph B. and Lillian (Ryan) Kelley. Father Kelley graduated from Boston College High School in 1952 and went on to enter St. John's Seminary. He was ordained in Feb. 2, 1960 at Holy Name Church, West Roxbury by Bishop Thomas J. Riley.

In addition to numerous archdiocesan assignments, one of the hallmarks of Father Kelley's ministry was his service as a U.S. Air Force Chaplain from 1971 to 1995. In his 24 years of years of service, he traveled the world to give spiritual support and comfort to the military personnel and their families. His longest deployment was from 1983 to 1991 and by the time he retired from the service, he had achieved the rank of colonel.

In May 1991, after returning from his 8-year Air Force deployment he was named pastor of St. Ann Church, West Newbury, where he served until 1999. After a short time of service on the archdiocese's Emergency Response Team, he was granted health leave status in 2000. On July 1, 2006 he was granted senior priest/retirement status.

Interment was at St. Joseph cemetery in West Roxbury.

Father Kelley is survived by his brother and sister-in-law, Francis and Betty Kelley of Marblehead and many nieces, nephews and great nieces and great nephews.