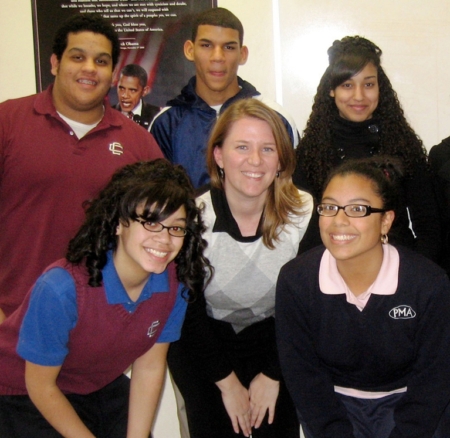 BOSTON -- A program to recruit Hispanic students for Boston's Catholic schools has recently received attention as a possible model for promoting Catholic education among Hispanic communities throughout the country.

Director of Hispanic outreach for the Catholic Schools Foundation, Erika Cedrone, began the Hispanic Recruitment Initiative in Boston in 2008.

"From the outreach that I have been doing nationally there is a lot of interest in it, but a lot of people don't know how to begin the process," she said.

In 2009 Cedrone worked to help the Big Shoulders Fund in Chicago begin that process.

Cedrone said she has also served as a guest speaker at conferences in recent years, offering information on Hispanic outreach. She spoke in 2012 at the Indiana Non-Public Education Conference in Indianapolis, and at the National Catholic Educational Association 2012 Convention and Expo in Boston.

Locally, the initiative goes beyond simply raising awareness among prospective students and their families.

"The intent was to go out and to work to find families that are interested, and then to help them through the process of getting them into Catholic schools, and then to support them once they are in," she said.

"It is not just getting them in, but it is helping once they are in," she said.

Cedrone, who is fluent in Spanish, gets the message out to the Hispanic community in Boston by visiting local parishes and giving informational talks on Catholic education after Mass.

She said many Hispanic parents in the parishes were unaware of the affordability and availability of Catholic schools.

"This program was really started because we know that there are Hispanic families that are Catholic, but we also know that they haven't been educated on what our Catholic schools can bring to their kids," she said.

She said in one parish she visited, the parents and students didn't understand that the building where they attended religious education classes was, in fact, the local Catholic school, which was open and taking enrollments.

"That's an issue, when the closest school many times is twenty feet down the road," she said.

Cedrone saw the lack of information as an opportunity to inform Hispanic communities about the benefits of Catholic education. She said, in some cases, she even gave out her personal cell phone number to maintain contact with families.

In the process of recruiting students, a coordinator reaches out to interested families and invites the family to visit a school.

With the coordinator, families tour the facilities and receive admissions and financial aid applications. The initiative offers the families help filling out applications correctly.

After the family receives an aid assessment for tuition, the initiative encourages families to register students for the upcoming academic school year. Coordinators remain available to work with families throughout the process of enrollment, and while the student attends the school.

"This is helping to take away those obstacles and create an environment where they feel like it's comfortable for them, and they are not walking into something that they don't know," Cedrone said.

A 2012 report created by Cedrone said between 2008 and 2012 the initiative resulted in 259 new Hispanic students who registered for classes, a 25 percent increase.