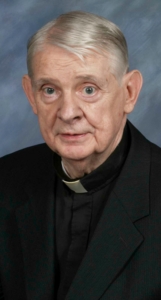 Father Eugene P. Curtin died on Jan. 8 at the archdiocese's Regina Cleri residence for retired priests. He was 81 and weeks away from reaching the 57th anniversary of his ordination.

Father Curtin was born in Boston on March 3, 1931. He was the youngest of two sons of Peter J. and Catherine (Kirby) Curtin. Raised in Blessed Sacrament Parish in Jamaica Plain, he attended the Cheverus Grammar School and Boston College High School, graduating as an honor roll student in the class of 1948. Nine members of his class joined him in entering St. John's Seminary that fall and, as that year came to a close, his father passed away on Dec. 14.

Father Curtin was ordained on Feb. 2, 1956 at Holy Name Church in West Roxbury by Bishop Eric F. MacKenzie. He celebrated his first Mass on Feb. 5 at his home parish of Blessed Sacrament in Jamaica Plain.

After nine years in Stoneham, he departed for a third parish named for St. Patrick. On Oct. 5, 1976 he was appointed pastor of St. Patrick Parish in Lawrence. In a pastorate of almost 16 years, he led the large parish with its many immigrant groups. During his years in Lawrence, Father Curtin also served as chaplain of the Ancient Order of Hibernians.

On June 18, 1991, he became pastor of St. Brigid Parish in the historic town of Lexington. In 2003, Father Curtin was diagnosed with Parkinson's Disease. As he was approaching the 50th anniversary of his ordination, he bid farewell to Lexington with a special Mass of Thanksgiving on Sunday, May 22, 2005. He was granted senior priest/retirement status on May 31. He became a resident of Regina Cleri in July 2005.