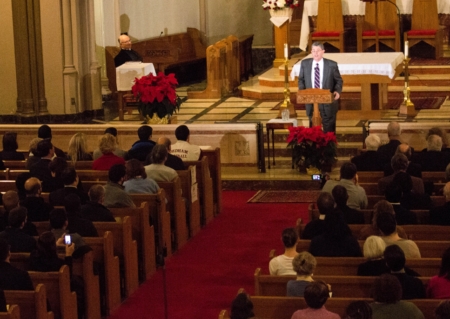 BRIGHTON -- Catholic author and biographer of Pope John Paul II, George Weigel, presented the concept of what he called "evangelical Catholicism" in his Jan. 14 talk at St. Columbkille Church in Brighton.

Weigel, a distinguished senior fellow of Washington's Ethics and Public Policy Center, presented his talk "Vatican II and the Birth of Evangelical Catholicism," as the third presentation in St. John's Seminary's Forum for the Year of Faith series. Before and after his talk, Weigel signed copies of his latest book "Evangelical Catholicism: Deep Reform in the 21st-Century Church."

Msgr. James P. Moroney, the rector at St. John's Seminary, had read the book before the talk and said the insight Weigel presented made him a welcome addition to the lecture series.

"What impressed me the most about both Dr. Weigel's book and his presentation was how clearly he described the broad horizon of what characterizes a Church that successfully evangelizes at the beginning of the 20th century. The vision was articulated with a clarity that could be understood by the average parishioner and would, at the same time, challenge the pastor of that parish," Msgr. Moroney said.

In his talk, Weigel gave a unique perspective on Catholic identity after Vatican II, as he called the mandate to mission evangelical Catholicism, the successor to "Counter-Reformation Catholicism."

He said Catholics over age 50 were raised in what he described as the "Counter-Reformation Church" that arose after the Protestant Reformation. He said that period in Church history gave rise to new religious communities, energized evangelism in Africa and Asia, met the challenge of 20th century incarnations of totalitarianism, and prepared the groundwork for Vatican II. He called it "a powerful expression of the faith that is ever-ancient and ever-new."

"However, its time has passed. The internal dynamics of the Church itself, attentive to the promptings of the divine Bridegroom and the unique challenges posed to the Great Commission by late modernity and post-modernity, have together impelled a new evolution in the Church's self-understanding and self-expression. The result of that evolution, evangelical Catholicism, is an expression of the four enduring marks of Christian ecclesial life: unity, holiness, catholicity, and apostolicity," Weigel said.

In his talk, he said evangelical Catholicism displays 10 characteristics that provide a profile of the Catholic Church of the future and suggest standards for continued and deep reform of the Church.

"That divine authority is what gives both Scripture and the Church their unique authority," he said.

He then presented the importance of Church teaching on the sacraments, particularly baptism and the Eucharist, in evangelical Catholicism.

"Third, evangelical Catholicism is a radically sacramental Church. The twin poles of its sacramental life are baptism and the Eucharist," Weigel said.

In his next point he addressed conversion to Christ as something that remains constant and develops throughout life.

"Fourth, evangelical Catholicism is a call to constant conversion of life, which involves both the rejection of evil and active participation in the works of service and charity," he said.

He said in his next point that evangelical Catholicism draws from tradition both ancient and authentic, as the Church provides teaching not easily stereotyped as traditionalist or progressive. He said the evangelical Catholic Church recognizes the value of extraordinary form Masses as a means to "accelerate a reform of the reform" of the liturgy, but called liturgical conflicts between traditionalists and progressives "deeply tiresome liturgy wars."

"While recognizing that beauty takes many forms, evangelical Catholicism is cautious about the capacity of starkly modernist architecture, art and design to convey rumors of angels in a disenchanted world. Conversely evangelical Catholicism is not antiquarian and does not regard the liturgical tangibles popular in the 1940s and 1950s as an aesthetic norm. The world is not going to be re-converted by maniples," he said.

In his sixth point, he spoke about a renewed connection with Scripture in the Catholic experience whereby the laity experience and read the Bible as the authentic word of God.

"The Church of the counter-reformation of course revered the Bible, but at something of a distance. The deep reform of the Church since Leo XIII has involved a return of the Church's book to the people of the Church as a special means of encounter with the living God," he said.

In his seventh point he said evangelical Catholicism maintains a respect and call for a variety of vocations in the Church, challenges some aspects of culture in the current times, and remains hierarchically ordered.

"If the proclamation of the Lord Jesus Christ as the unique savior of the world is the deepest point of counter-cultural conflict between the Catholic Church and post-modernity, the Church's claim that its hierarchical structure embodies the will of Christ, and not ancient social convention, is perhaps the next most counter-cultural of Catholic convictions," he said.

In a cultural environment where all authority is suspect and the notion of divine authority is thought to be a psychological hangover from the pre-modern world, the claim that that divine authority is transmitted in an unbroken chain of apostolic succession through the bishops of the Church in communion with the Bishop of Rome seems literally incredible," Weigel continued.

Evangelical Catholicism, Weigel said in his eighth point, remains counter-cultural to the mainstream and forms a culture unique of itself.

"Those who are living in friendship with the Risen Lord in the communion of the Church speak a distinctive language, in which for example obedience and forgiveness have richer meanings than in the ambient post-modern culture," he said.

In his ninth point, Weigel said evangelical Catholicism enters public discourse with a voice of reason, which maintains conviction in the Gospel.

"Because it lives under two sovereigns, evangelical Catholicism is bilingual. The Gospel cannot be preached in any other language than its own, a language deeply shaped by the sacred scriptures, a language that has been revealed and received and is not to be recast in the culture when the culture suggests that the Church do so. Yet, in addressing public policy in pluralistic and secular societies evangelical Catholicism speaks its second language which is the language of reason," he said.

In his final point he defined the Church herself as ordered to mission, to the proclamation of the Gospel for the salvation of the world.

"In an evangelical Catholic perspective, every Catholic is a missionary, an evangelist, a disciple commissioned by the Lord to take the Gospel to every nation calling all to be baptized in the name of the most holy trinity," he said.

Msgr. Moroney said the talk gave a perspective to understand the new evangelization.

"When we talk about the new evangelization -- which in this Year of Faith is a phrase that is used in almost every third sentence -- people often ask themselves: What is this new evangelization? What is the evangelical character of the Church? How does the Church view herself as fulfilling the mandatum of the Lord 'Go forth and teach all nations baptizing in the name of the Father, Son and Holy Spirit?' And I think Dr. Weigel in a wonderful way gave us an expansive and synthetic answer to that question," he said.