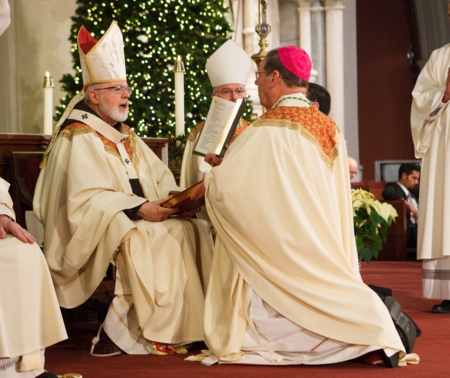 Cardinal Seán P. O'Malley presents the Book of Gospels to Bishop Robert P. Deeley during the Rite of Ordination at the Cathedral of the Holy Cross on Jan. 4, the memorial of St. Elizabeth Ann Seton. Pilot photo/Gregory L. Tracy

SOUTH END -- The Archbishop of Boston Cardinal Seán P. O'Malley ordained Bishop Robert P. Deeley to the episcopate on the memorial of St. Elizabeth Ann Seton, Jan. 4, at the Cathedral of the Holy Cross in Boston.

The Archbishop of St. Paul and Minneapolis John C. Nienstedt and Auxiliary Bishop of Providence Robert C. Evans co-consecrated at the ordination of Bishop Deeley. Ordained in 1973 the three classmates celebrate 40 years in the priesthood this year.

More than 40 archbishops, bishops and abbots from different parts of the United States and the world participated in the ordination of Bishop Deeley, 66, in the afternoon ceremony. Archbishop Carlo Maria Vigano, apostolic nuncio to the U.S., came to the cathedral for the first time for the ordination.

Leaders of other local faith communities also attended the ordination, including Greek Orthodox Metropolitan Methodios of Boston and Rev. Laura E. Everett, executive director of The Mass Council of Churches.

The Rite of Ordination began with Archbishop Vigano reading the apostolic letter from Pope Benedict XVI appointing the new bishop.

In his homily, Cardinal O'Malley first welcomed friends, family and distinguished guests of the new bishop including the apostolic nuncio, prefect emeritus of the Congregation for the Doctrine of Faith Cardinal William J. Levada, consul general of Ireland to Boston Michael Lonergan, former mayor of Boston and ambassador to the Vatican Raymond Flynn, and Bishop Deeley's brothers Father Kevin, Thomas, Paul and John.

"Welcome. It is a delight to have all of you here," Cardinal O'Malley said.

He praised Bishop Deeley and expressed gratitude to the Holy Father for naming the new auxiliary bishop.

"In so doing the Holy Father has not named a stranger, but one of his own collaborators who worked closely with him," Cardinal O'Malley said.

Bishop Deeley served as an expert in canon law with the Congregation for the Doctrine of the Faith in Rome between 2004 and 2011.

Cardinal O'Malley compared his expectations of Bishop Deeley to the role of the bishop piece in the game of chess.

He said St. Teresa of Avila was a great fan of chess who compared the goal of capturing the king in the game to the goal of Christians to seek out Christ.

"In our quest 'to capture the King' the role of the bishop is crucial. One of the most important things the Catholic Church does is to make bishops, who can link us to the apostles and to Christ himself, and who allow us to be a eucharistic people," the cardinal said.

"Our bishops are ordained by bishops to fulfill the mission Christ has given us to teach, to sanctify, and to lead. The ordination ceremony speaks to us about the meaning of the sacrament," he said.

Following the homily, the Rite of Ordination continued with Cardinal O'Malley examining Bishop Deeley regarding his resolve to uphold the faith and to discharge the duty of service in the Church.

"May God who has begun the good work in you bring it to fulfillment," the examination ended.

The rite continued with the laying on of hands by Cardinal O'Malley, Boston's other auxiliary bishops and visiting archbishops and bishops from other dioceses.

The cardinal then anointed the head of the new bishop.

With the Book of Gospels placed over Bishop Deeley's head, Cardinal O'Malley prayed the Prayer of Ordination with the essential words that conferred the sacrament.

Bishop Deeley received the same Book of Gospels as a symbol of his preaching responsibility.

Afterward, the other archbishops, bishops and abbots welcomed Bishop Deeley into the College of Bishops with the fraternal kiss.

Bishop Deeley gave remarks to the gathering just before the final blessing. He thanked those in attendance and the entire community of the Church.

"I offer thanks to almighty God, who has blessed me in life with abundant gifts and called me by faith to baptism and to the sacred priesthood -- an honor and grace I have treasured for these 40 years," Bishop Deeley said.

Bishop Deeley also called for mutual prayer of support between himself and other members of the Church. A card he received on his desk earlier in the week came from a young Catholic school student, who said "we are praying for you, please pray for us."

"What you and I must do in addition to praying for each other is to share that pleasure which we see as the joy we find in Jesus Christ. Pray then for me, as I will for you, that we might be counted among those living the truth in love, helping others through our lives to come to know Jesus, whose coming among us as a sign of God's love we celebrate in these days of Christmas," the new bishop said.

Bishop Deeley will continue serving the archdiocese as vicar general and moderator of the curia, with the added authority of a bishop.