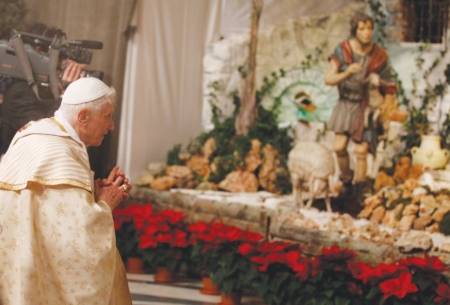 Christmas is evidently for children--not only for children, obviously, but especially for them. And yet Pope Benedict is eighty-five--not exactly a child anymore. It seems remarkable, then, that at his age he should teach us how to approach the mystery of Christ's birth and infancy with both childlike simplicity and the theological sophistication for which he is renowned. While physically frail, he is fortunately far from being senile, as he is as spiritually and mentally astute as ever. He models for us Christ's statement that "unless you change and become like little children, you will never enter the kingdom of heaven." (Mt 18:3). Christmas, it turns out, is a fountain of youth, or at least youthfulness.

Last month the pope published his long-awaited third volume of Jesus of Nazareth, which explicates the Infancy Narratives of the first couple chapters of the gospels of St. Matthew and St. Luke. On Wednesday, Dec. 19 at his general audience, he spoke at length of Mary as the model of all believers. And on Thursday, Dec. 20, he wrote a commentary on Christmas in the Financial Times entitled "A time for Christians to engage with the world." This has got to be the first time a pope has written a column for a secular daily.

In his book, he defends the historicity of the gospel accounts of Jesus' birth and infancy: "It was not with the timelessness of myth that Jesus came to be born among us. He belongs to a time that can be precisely dated and a geographical area that is precisely defined: here the universal and the concrete converge. It was in him that the Logos [the Word], the creative logic behind all things, entered the world. The eternal Logos became man: the context of place and time is part of this. Faith attaches itself to this concrete reality, even if the resurrection then bursts open the categories of time and space..."

In his Wednesday audience, the pope talked about lessons we could draw from Mary's life: "The Lord's birth, which we will soon celebrate, invites us to live her same humility and obedience of faith. God's glory is not shown in triumph nor in the power of a king; it doesn't radiate in a famous city, in a sumptuous palace, but takes place in the womb of a virgin; it is revealed in the poverty of a baby. God's almighty power, even in our life, acts with the strength, often silent, of truth and love. Faith tells us, then, that the defenseless power of that Baby ultimately overcomes the noise of the powers of the world."

Here's what the pope wrote in the Financial Times by way of explaining the meaning of Christmas: "In Italy, many crib scenes feature the ruins of ancient Roman buildings in the background. This shows that the birth of the child Jesus marks the end of the old order, the pagan world, in which Caesar's claims went virtually unchallenged. Now there is a new king, who relies not on the force of arms, but on the power of love. He brings hope to all those who, like himself, live on the margins of society. He brings hope to all who are vulnerable to the changing fortunes of a precarious world."

At a time when our faith is under challenge from the political powers that be, Pope Benedict reminds us of the importance of being faithful and not succumbing to the idolatry of power and money. When government is seeking ever greater control over our lives, our spirits must be free to fly to Bethlehem, with Joseph and Mary. "All with Peter to Jesus through Mary."

Dwight G. Duncan is professor at UMass School of Law Dartmouth. He holds degrees in both civil and canon law.